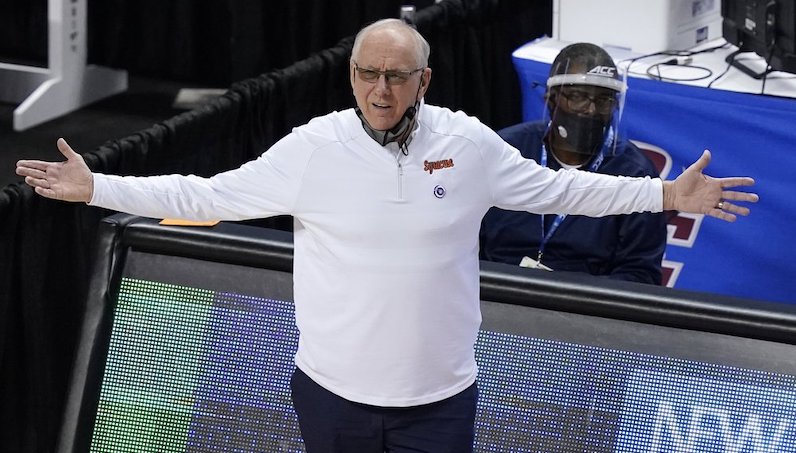 Syracuse head coach Jim Boeheim reacts to a call during the second half of an NCAA college basketball game against Virginia in the quarterfinal round of the Atlantic Coast Conference tournament in Greensboro, N.C., Thursday, March 11, 2021. (AP Photo/Gerry Broome)

Despite bits of Bid Thievery, like Oregon State winning the Pac-12 Tournament, Louisville and Syracuse remain on the right side of the NCAA Tournament bubble.

According to ESPN’s Joe Lundari, Louisville and Syracuse are two of his Last Four In teams. Lunardi has both teams as 11 seeds, set to compete in the First Four.

Syracuse ranks 40th in the NET. Louisville is slightly lower in the NET rankings — checking in at No. 56.

Of course, things could get dicey if Cincinnati were to upset Houston in Sunday afternoon’s AAC Tournament final.

Terrible year to be a bubble team.

First time in at least a decade there have been two major-conference bid thieves.

Cincinnati can take away another bid tomorrow.

Both teams went to the ACC Tournament hoping to add one positive item to their postseason resumes. Louisville, however, was bounced out by Duke in a second round matchup. Of course, less than 24 hours later, Duke left the tournament following a positive COVID-19 test result within the program.

Syracuse lost its quarterfinal matchup vs. Virginia thanks to a buzzer-beating 3-pointer from Reece Beekman. One day later, Virginia exited the tournament following a positive COVID-19 test result.