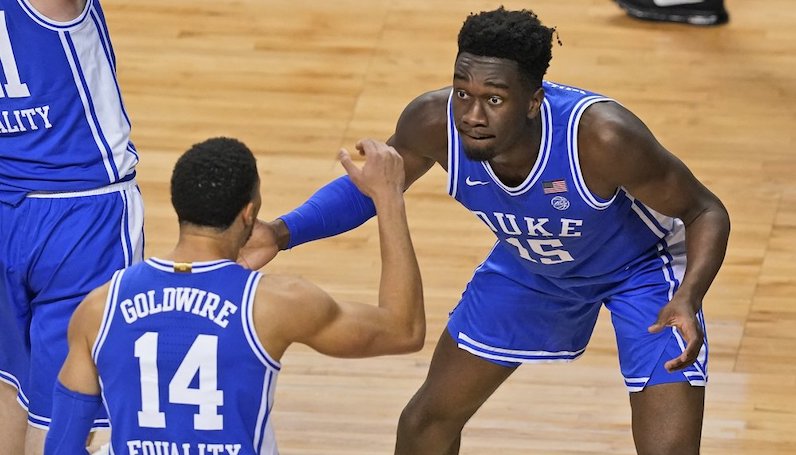 According to a report from Stadium’s Jeff Goodman, Duke basketball has received a positive COVID-19 test; the Blue Devils won’t play tonight in Round 3 of the ACC Tournament vs. Florida State.

As Duke looked to mount a last minute run for the NCAA Tournament, the Blue Devils defeated Boston College on Tuesday in Greensboro. One day later, Duke took down Louisville — Wednesday night.

This effectively concludes the 2020-21 season for Duke basketball. Duke will miss the NCAA Tournament for the first time since 1995.

Duke has a positive COVID test and will not play tonight in the ACC tourney, source told @Stadium. Looks like season is over for the Blue Devils.

Prior to the ACC Tournament, Duke played most recently on March 6 — a road loss against UNC.

The news is certainly disconcerting on multiple levels. During the first two days of the tournament, Duke drove back and forth from Durham to Greensboro, opting to stay in the team’s de facto home bubble.

So far, there are no other reports of additional positive COVID-19 results from the tournament. Although this is disconcerting given the circumstances of the ACC Tournament — teams coming to one location from disparate regions of the country.

Let’s not forget, too: the 2021 NCAA Tournament starts next week.

This is the first positive COVID test among Duke's Tier 1 personnel — players and coaches — since the pandemic began, source tells @CBSSports.

The timing is unreal.

Louisville issues a statement: “confident” that the basketball program won’t have to experience any contract tracing, due in part to Kinexon tracking technology.

A statement from Louisville in light of Duke’s positive COVID-19 test. School says “we are confident” that “we will not experience any contact tracing” after using the ACC’s technology to track close contacts with the positive person. pic.twitter.com/XayFrOBikm