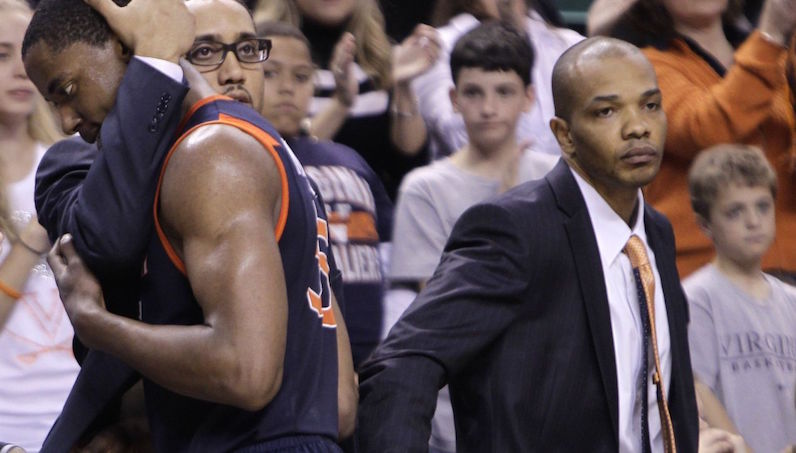 From an unexpected Sweet 16 run at Washington State to achieving a No. 1 ranking at Virginia, one man has been, mostly anonymously, at Tony Bennett’s side for all 12 of his seasons as a head coach. But with the Cavaliers reaching rare heights this season, unassuming associate head coach Ron Sanchez may not be able to avoid the spotlight much longer.

Virginia fans have gotten used to hearing Bennett’s name come up for big-time job openings each offseason, but shouldn’t be surprised if this spring it is Sanchez who is linked to head coaching jobs.

With each season that passes it becomes less likely Bennett ever leaves for another college job, but Sanchez could potentially be a big loss. Until recently, the Bronx-raised assistant rarely got enough credit from outside the program for Virginia’s success.

That likely has a lot to do with Sanchez being more prone to hard work than self-promotion, but folks in the basketball world have taken notice. ESPN listed Sanchez among the nation’s best recruiting assistants and when CBS Sports surveyed college basketball coaches over the summer, Sanchez came in second to Duke’s Jon Scheyer among assistants believed ready for a head coaching job.

Sanchez got his first full-time Division I coaching gig under Tony’s father Dick Bennett at Washington State and has been a key figure identifying and signing talent that fits the Bennett system, from Klay Thompson at WSU to fellow New Yorker and current UVA star Ty Jerome.

But Sanchez’s value extends far beyond that of a mere talent scout. In a program known for its player development, Sanchez has helped guide both big men and guards for Virginia. Players such as Mike Tobey and Kyle Guy have specifically pointed to Sanchez as someone who pushed them to continue to develop.

Guy has expanded his repertoire beyond a pure three-point shooter, to someone who has consistently scored off the dribble and with penetration.

“Coach Sanchez has been on my rear end every time I catch it to look at the basket, and says I will put the fear of God in somebody because I can shoot it,” Guy told reporters before the season. “Getting into the paint and getting fouled more is something I have worked on.”

Sanchez was a candidate for the opening at James Madison last year, but chose to stay at UVA, and it’s a decision that could have a huge payoff for both he and the Cavaliers.

A sleeping giants looking to replicate Virginia’s resurgence, but unable to lure Bennett away from Charlottesville, may take a long look at Sanchez this offseason.

Virginia basketball tops the charts, plus dominance of Luke Maye — ACC in the top 25