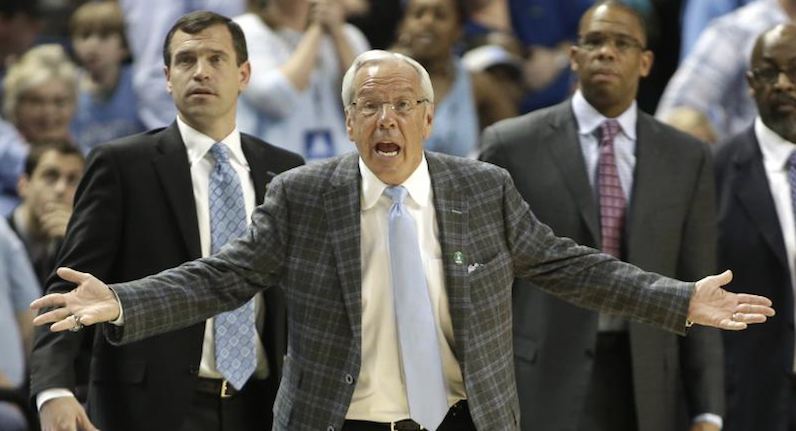 Roy Williams is set to be replaced by former assistant coach Hubert Davis as the next men's basketball coach at UNC. (AP Photo)

Hubert Davis will become the next head coach of men’s basketball at the University of North Carolina. Davis will replace Roy Williams, who retired last week after 18 seasons as the program’s head coach.

Early in the afternoon on Monday, UNC announced an emergency Board of Trustees meeting, which indicated a decision was made. The plan was for this process to run quickly. As of this moment, contract details are not yet available.

Davis is a long-time assistant coach for Williams; he re-joined the UNC program before the start of the 2012-13 season. During his time back in Chapel Hill, Davis was also the head coach of the school’s JV basketball team.

Davis holds the UNC record for career three-point percentage, too: 43.5 percent. As a senior, he averaged 21.4 points per game and was named All-ACC.

After graduating from UNC in 1992, Davis went on to play 12 seasons in the NBA. Following his retirement, Davis began work at ESPN as a college basketball analyst, a post he held until leaving to join the coaching staff in 2012.

Shortly after Williams announced his retirement, Davis quickly emerged as the favorite to replace his former boss. While the decision of Willams shook college basketball on its axis, the school started its coaching search — without outside help from a firm.

Given the magnitude of the job, UNC also held conversations with Gonzaga’s Mark Few, Brad Stevens of the Boston Celtics, Villanova’s Jay Wright and Chris Holtmann of Ohio State. Holtmann reportedly interviewed for the job on Monday, April 5.

The decision to hire Davis ultimately came down to AD Bubba Cunningham and UNC Chancellor Kevin Guskiewicz; however, Williams had a big say in the decision-making process. From all accounts, Williams seemed to prefer Davis as his successor.

Hubert Davis was Roy Williams’ choice to succeed him, and that went a long way with Bubba Cunningham, source told @Stadium.

But there were multiple former players in the Carolina family that felt as though Wes Miller was the better pick for the job.