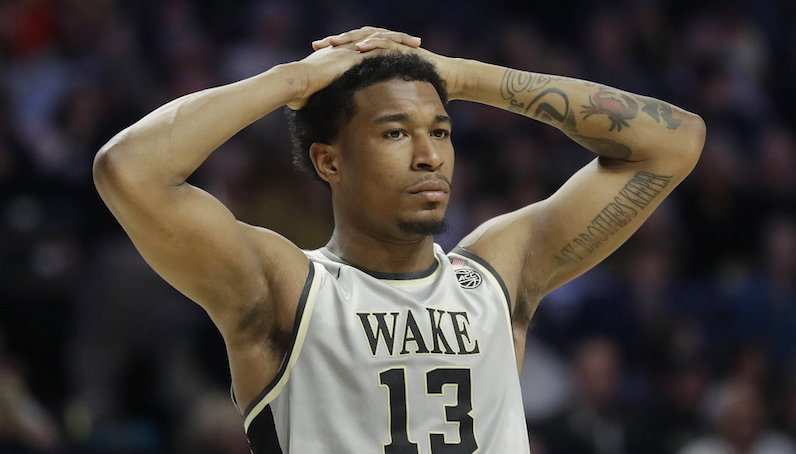 Who is the real Bryant Crawford?

Is he the player who made a steal and a fastbreak basket to give Wake Forest a second-half lead against Miami? Or is he the player who got up from that basket and — frustrated that a foul wasn’t called — slapped at the ball and received a technical? The likely answer is both.

Is he the player who scored 12 first-half points and had six second-half assists to lead the Deacons to a 64-63 lead against Clemson? Or is he the player who missed four straight shots down the stretch against the Tigers, including an NBA-length 3-pointer with 16 seconds left on the shot clock?

A lot was expected from Crawford this season. After a solid sophomore season, he made national award lists, and the big worry for Wake Forest seemed to be whether he might go pro after this season.

But his junior season has been a struggle. His box score numbers are fine: 16 points and almost five assists. At times, he can look like one of the best pick-and-roll guards in America.

Look deeper, though, and the improvements that Crawford made between his freshman and sophomore seasons seem to have disappeared:

Despite the fact that it seemed to be “his team” this year, Crawford has struggled in clutch moments. Moreover, his body language has often been negative, which has made it a struggle to see him as a leader.

Wake Forest saw some of the same from Codi Miller-McIntyre and Devin Thomas in 2015-2016 as their careers were ending in frustrating fashion. Perhaps this year’s opening string of four losses in five games spun Crawford mentally into a similar space. Or maybe Crawford hasn’t been happy that he’s played so much of this season off the ball, with Brandon Childress running the offense.

Whatever it is, it’s been tough to watch for a talented player who was expected to be the engine of the team.

Wake Forest assumed that the real Crawford was the one who played well last season and would improve again this year.

But maybe last year was more of an anomaly, and the real Crawford is more inconsistent, both in his play and his decision-making. After all, we’ve now seen two years of that Crawford.

The positive for Wake Forest? It now seems very unlikely that Crawford would turn pro after this season.

But the catch? It’s that the Deacons could have to live through another roller-coaster season with their best player.

More than just dunks: How Doral Moore’s influence on Wake Forest extends beyond the paint