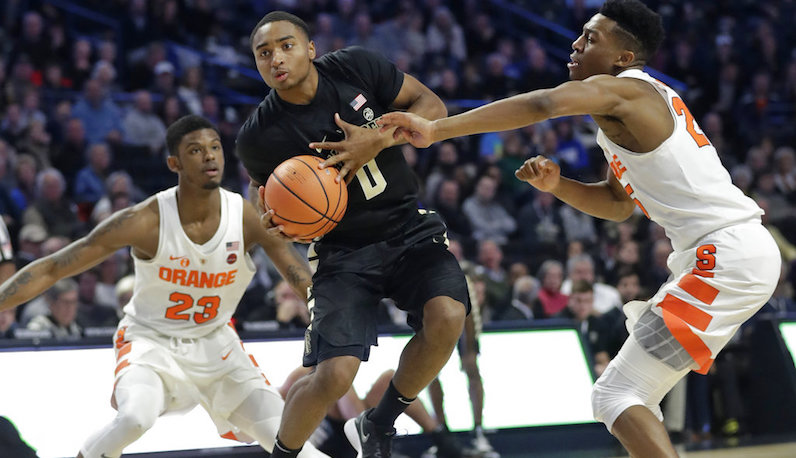 It’s not that Childress, a sophomore, has the kind of personality that rubs people wrong, and it’s not because people are comparing him to Randolph, his father and a Wake Forest legend.

It’s not even because his stats are terrible: Childress is averaging 8.4 points, 3.9 assists and 2.9 rebounds, and he’s shooting 35 percent from three-point range and 76 percent from the line.

It’s that Childress can be maddeningly inconsistent, and the question always seems to be whether he’s taking minutes from more talented players.

Childress is ultra-aggressive, which is a trait these Deacons can use. They have a lot of stand-around players, and Childress rarely stands still with the ball. He’s also the only creator other than Bryant Crawford.

That’s led to some good things, such as 17 points and eight assists against Army or a key bucket with 1:15 remaining against Syracuse. But it’s also led to questionable shots, and sometimes a lot of them. In the loss to Tennessee, for example, Childress took 11 of WFU’s 53 shots (second-most on the team), despite only making three.

And really, is Childress the player you want taking a tough floater in the lane with the game on the line, even if he made it against the Orange?

Danny Manning is playing Childress about 24 minutes a game, which means he’s often paired with Crawford. The hope is that the two can facilitate offense for rest of the team.

Although he doesn’t start, Brandon Childress is playing the fourth most minutes on the team; that level of usage (21 percent) seems to create some issues.

Crawford, who is playing almost two minutes less than the last two seasons, often looks lost when he’s not dominating the ball. When Childress is in, his aggressive nature puts Crawford in an off-guard role, and Crawford doesn’t seem particularly comfortable.

Brown, a top recruit, is only averaging 20.7 minutes a game. That number has been much smaller lately: Against Tennessee, UNC and Syracuse, Brown only averaged 14.3 minutes. Brown also has had a foot injury this season, but Manning hasn’t mentioned anything about protecting him.

So the issue is whether Manning should be relying on the same kind of limited bench that seems to be dominating the ACC lineups this season. So far, his attempt to use multiple players across the backcourt and the wing hasn’t played out successfully.

If Crawford and Woods were playing 32-33 minutes a game at point guard and shooting guard respectively, and Brown averaged in the high 20s at small forward, roles would be much clearer. The team also would clearly be Crawford’s most of the time. Childress’ playing time could be cut in half to 10-12 minutes a game, and Mitchell Wilbekin could still sub in as a shooter.

Childress thought he would have to overcome comparisons to his father if he came to Wake Forest. Instead, it’s turned out to be questions of nepotism when he seems to be dominating the ball.

While that claim is likely spurious, Manning still sees something in Brandon Childress that many don’t. How he allows that vision to play out could play a big role in how the Deacons finish the second half of the season.

After Jessie Bates exits for the NFL, what’s next for Wake Forest football?