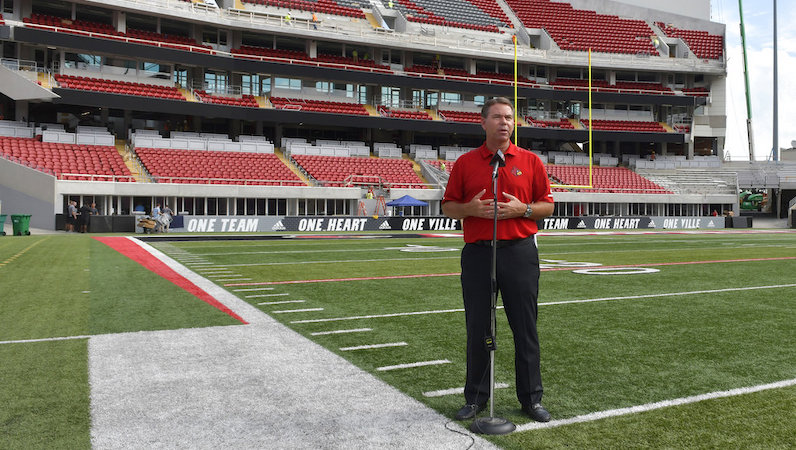 University of Louisville Athletic Director Vince Tyra addresses the media as he stands in front of the expansion of Cardinal Stadium, Wednesday, Sept. 5, 2018, in Louisville, Ky. The expansion adds about 6,000 seats to Cardinal Stadium, including expensive and exclusive field-level suites, premium boxes and club seats, among other amenities. (AP Photo/Timothy D. Easley)

After three years as the University of Louisville’s president, Neeli Bendapudi will leave the school and become the next president at Penn State. Bendapudi arrived at Louisville (from Kansas) in 2018; she was hired to replace former president  James Ramsey.

Announcement could come within a few hours.

In may ways, this development is significant. The timing is almost unbelievable, too.

That was complicated, however, due to a non-compete clause in Tyra’s contract. Back on Monday night, Louisville held a Board of Trustees meeting to discuss personnel matters. The non-compete clause in Tyra’s contract pertained to other ACC programs. Essentially, this meant that for Tyra to  to accept the FSU job, Louisville’s Board of Trustees would have to waive the clause.

During another Board of Trustees meeting on Wednesday, the clause was waived; the path for Tyra to Tallahassee was clear.

NEW | U of L athletic board approves an addendum to the contract of athletic director Vince Tyra that eliminates his non-compete clause, and eliminates 30-day clause for AD to terminate his employment.

Now, however, the departure of Bendapudi from Louisville may actually change the decision-making process for Tyra. The relationship between Bendapudi and Tyra was strained — and possibly why the AD was looking for a road out of town.

According to Louisville report Rick Bozich, a source informed him that — for now — Tyra remains at Louisville, and this most recent development could cause Tyra to remain at Louisville.

Just asked a friend of Vince Tyra if the latest developments could result in Tyra staying at Louisville. His response:

Another fun day at the old ball park.

According to Pat Forde of Sports Illustrated, Tyra will no longer consider the Florid State job. Tyra may stat Louisville; however, he could also leave college athletics entirely and return to working in the private sector.

Sources now saying Tyra is NOT going to Florida State. May return to private business (which was rumored last night), may stay at U of L. Even by Louisville standards, this is a weird saga.

Vince Tyra is now reportedly unlikely to return to Louisville. There’s never a dull moment with the Cardinals.

Sources close to Vince Tyra say they do not believe he'll return to the University of Louisville.

As we have seen in the past 12 hours, anything can happen. But this is where we stand right now.