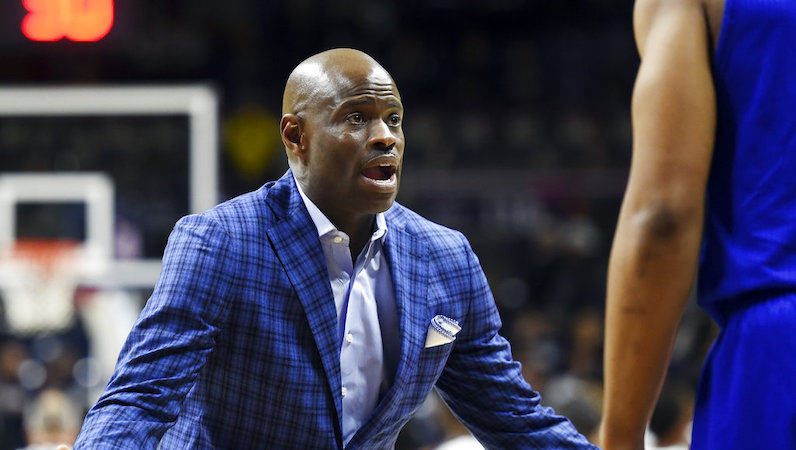 UMKC head coach Kareem Richardson talks to his team in the first half of an NCAA college basketball game against Connecticut Sunday, Nov. 11, 2018, in Storrs, Conn. (AP Photo/Stephen Dunn)

Prior to his time at Clemson, though, Richardson, 47, coached all over the country. Richardson’s coaching career started in 1997; he’s spent most all the last 25 years as an assistant, although Richard was the head coach of UMKC for six season (2013-19).

Richardson and Keatts have a history with one another, too. Both men were assistant coaches on Louisville’s 2013 NCAA Championship Team.

Kareem Richardson just completed his 25th year as a head coach or assistant in college basketball.

His stops include head coach at UMKC; assistant at Xavier, Clemson, Indiana State and Louisville — where he coached alongside Kevin Keatts in 2012-13.https://t.co/RmKuwu8UO5

With a good bit of turnover on the coaching staff, Richardson is the second new assistant to join the NC State program this offseason. Two weeks back, the Wolfpack also brought back Levi Watkins, who played at NC State under Herb Sendeck in the early 2000s (2001-05).

The 2022-23 season marks a big year for Keatts in Raleigh; the program hasn’t gone to the NCAA Tournament since 2018, although the Pack would’ve been there in 2020 if not for the COVID-19 Pandemic.