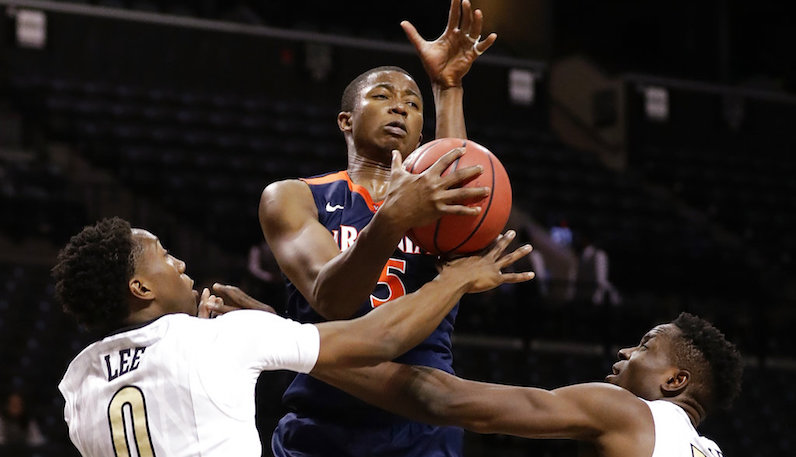 There was a moment Friday during Virginia’s victory against Rhode Island in Brooklyn, at the under-12 minute media timeout, when Cavaliers head coach Tony Bennett spent most of the break outside of the huddle calming down redshirt sophomore Mamadi Diakite.

The game had turned physical, Diakite had spent much of the second half battling with the Rams in the paint, and at that point he was fired up over a hard foul on teammate Isaiah Wilkins. A minute later, Diakite and Rhode Island’s Jared Terrell got tangled up and were issued a double technical. Bennett didn’t seem too upset about it.

Diakite, a raw prospect from Guinea who played high school ball outside Charlottesville at The Blue Ridge School, is a long, lean athlete who was one of the best shot blockers and rebounders on the roster even during his redshirt season. His offensive game has continued to develop, and he’s averaging 6.3 points per game and getting minutes ahead Jay Huff, who is still figuring out his place in the Pack Line defense.

But what Diakite is really bringing, and something that was missing for UVA last season, is a big man who plays with a bit of an edge. The Cavaliers roster is filled with different personalities. Devon Hall is rarely phased, likely to joke around with opponents during a break in the action. Jack Salt, bruiser that he is, is also ultra polite in ways that are almost stereotypically New Zealand. His first day on The Grounds, a sweat-drenched and exhausted Salt thanked his coaches for putting him through such a “lovely workout.”

Diakite isn’t trying to make friends on the court. He’s still thin at 6-9, 228 pounds, but as evidenced in Brooklyn, he’s not afraid to bang with or get in the face of bigger and more experienced players.

That’s not to say there’s anything dirty or out of line about the way Diakite plays. The aggressive attitude he’s shown this season is reminiscent of Darion Atkins or Anthony Gill. And as much as the Wahoos missed Malcolm Brogdon a year ago, they may have missed Gill as much or more.

Diakite is averaging 18.3 minutes per game, and if Huff and all his offensive skill can’t work his way out of the doghouse, that number could even increase considering Salt’s tendency to get in foul trouble.

The truth is, Diakite can fill much of the same role people expected from Huff. Huff has deeper range beyond the 3-point line, but Diakite can function as a stretch four knocking down 18-foot jumpers and they are similar shot blockers.

But Diakite isn’t going to allow any easy buckets in the lane, and isn’t easily intimidated. Monday he was a key to Virginia frustrating Wisconsin star Ethan Happ. Right now those are qualities Bennett values over a 7-footer hanging out around the perimeter.