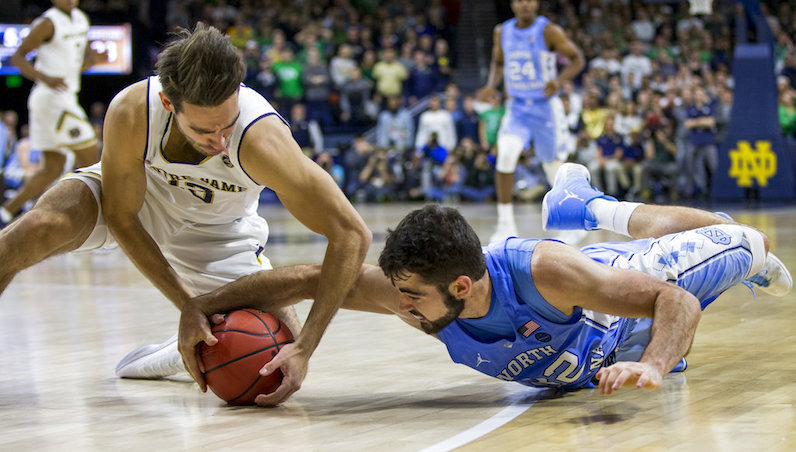 North Carolina junior Luke Maye has been named the Atlantic Coast Conference Basketball Player of the Week, while Duke’s Marvin Bagley III was named the league’s Rookie of the Week.

ACC basketball weekly honors are determined by a vote of a 15-member media panel. Maye was recognized as the ACC Player of the Week for the third time this season, while Bagley earned his fifth Rookie of the Week accolade.

UNC’s Maye scored 50 points and grabbed 29 rebounds (25.0 ppg and 14.5 rpg) in wins over Boston College and at Notre Dame. The Huntersville, North Carolina native added five assists and three steals while connecting on 21 of 34 shots from the floor (61.8 percent).

Maye had 32 points and 18 rebounds in a 96-66 win over Boston College, including 21 points and 10 rebounds in the first half. It marked the third time this year that Maye had a double-double in the first half. His 32 points were the most by a Tar Heel at the Smith Center since 2009. He was 13-for-20 from the floor and 4-for-5 from three-point range. Maye’s 13 field goals tied for the second-most in any game by a Tar Heel in the last 15 years.

In UNC’s 69-68 win over Notre Dame, Maye scored a team-high 18 points and grabbed a game-high 11 rebounds for his 10th double-double of the season. He was 8-for-14 from the floor with three assists and no turnovers, and he tied his career high with three steals.

Duke’s Bagley led the Blue Devils to a pair of ACC wins last week with double-doubles in both victories.

The rookie scored 16 points and grabbed 15 rebounds in Wednesday’s 87-52 at Pitt – Duke’s largest margin of victory in an ACC road game since 1999. Bagley followed that with one of his best all-around games this season, scoring a game-high 30 points, with 11 rebounds, three assists, three blocks and a career-high four steals in Saturday’s 89-71 victory over Wake Forest.

Bagley set an ACC freshman record with his fifth 30-point game, while his 14 double-doubles have tied Duke’s freshman record. The Phoenix native leads the ACC in both scoring and rebounding, and is the only player in the country averaging 22.0+ points and 11.0+ rebounds.