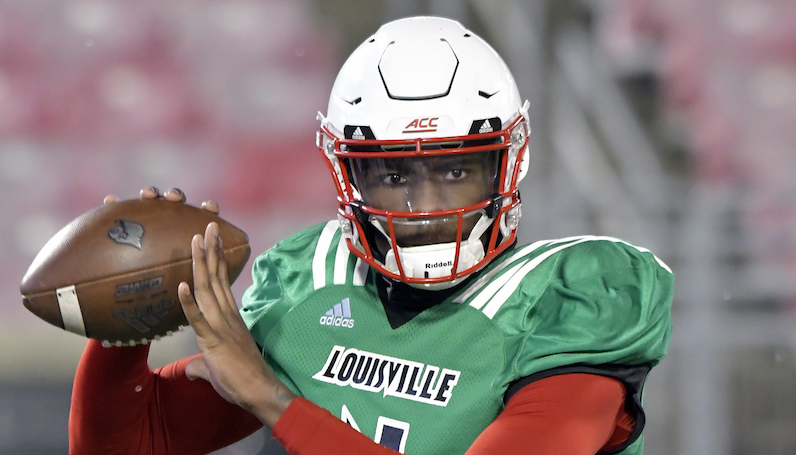 Louisville’s first-year head coach Scott Satterfield will go with Jawon Pass as his starting quarterback for the 2019 opener against Notre Dame. Pass, a redshirt junior, has thrown for 2,198 yards and 10 touchdowns in 16 career games, including nine starts during the 2018 season.

As a sophomore, Pass completed 54 percent of his passes (6.5 yards per attempt) for 1,960 yards, eight touchdowns and 12 interceptions. Pass won the job over Malik Cunningham, who threw for 473 yards last season. Cunningham missed time during fall camp with a knee injury.

Initial story as Jawon Pass is named Louisville’s starting QB for Sept. 2 and against Notre Dame. And a few other notes from Satterfield’s presser.

"There are times when he looks unbelievable, like really, really good," Satterfield said. https://t.co/QqxkfEb3e3

A former 4-star prospect in the 2016 class, Pass backed up Lamar Jackson for two years, including a redshirt season in 2016. He opened the 2018 season for Louisville against Alabama — throwing for 252 yards, two touchdowns and two interceptions. Louisville lost the game by 37 points.

Now with Satterfield at the helm, Pass has another opportunity to start an opener for the Cardinals; once again, he’ll start the season against a powerful defense — Notre Dame. In terms of S&P-plus, Notre Dame projects as a top-10 defense this season.

During the 2018 season, Pass ran for two touchdowns and 93 yards, officially. However, if you add back in the numbers he lost on sacks behind Louisville’s woeful offensive line, that number balloons up to 283 yards (6.2 yards per carry).

Last season, Louisville allowed 43 sacks (3.6 per game) — one of the five first numbers in the FBS. Pass and Cunningham were both sacked on more than nine percent of their drop-backs. However, with former NC State offensive line coach Dwayne Ledford in town as Louisville’s line coach and offensive coordinator, there’s room for optimism.

Man it’s hard not to be excited about Dwayne Ledford. https://t.co/8ELh3EJ4w3

Unfortunately for the Cardinals, they will be without Jordan Davis — the team’s top tight end — to start the season. He’s on academic probation and will sit out the first two games. Going back to his time at Texas A&M (2015 season), Davis, a transfer, has eight career receptions; that includes two catches (on seven targets) for 23 yards last year.

Satterield just said that Jordan Davis will be out for the first two games due to academics.

Also, P.J. Blue is out for the season with an ACL injury.