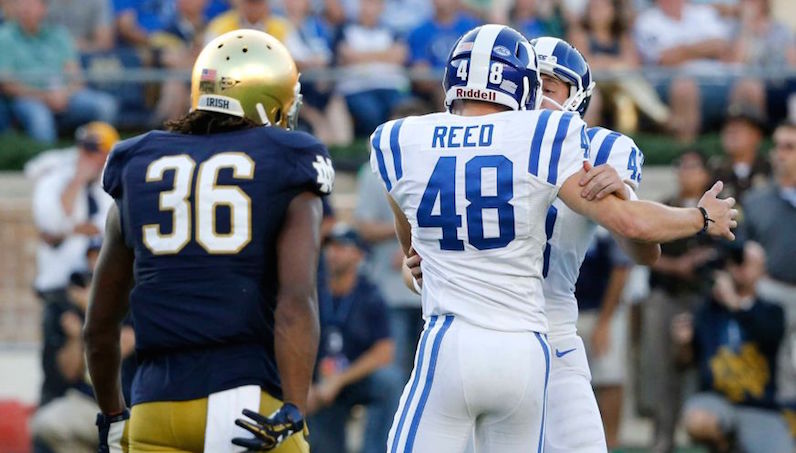 When Duke starts football practice on July 31, expect to see David Cutcliffe spending far more time around the kickers than he did in previous seasons.

That area qualified as a disaster for the Blue Devils last season, rightfully absorbing plenty of blame for the team’s 4-8 record that left it home at bowl season for the first time since 2011.

So Cutcliffe is on record saying he’ll be monitoring that area closely between now and Duke’s Sept. 2 opener with N.C. Central.

“I’m going to take that on quickly,” Cutcliffe said. “They are going to see me more than they want to see me, all those specialists. If they can’t perform under my pressure, then there is no way they are going to perform in big ball games like we’re going to have early. There is going to be some pretty heated competition in that regard.”

Duke freshman A.J. Reed made only 3-of-10 field goals last season. Yes, he booted the game-winner when the Blue Devils won 37-35 at Notre Dame in September. But making only 3-of-10 left Duke last among FBS teams in field goals made and success rate.

Reed is still on the team but there’s plenty of competition for the job he held last season. It started in the spring when punter Austin Parker began also working on place kicking.

On Duke’s post-spring depth chart, Parker is No. 1 at kicker and punter. He averaged 38.8 yards per punt last season which left him 12th in the ACC. So he’s not on solid ground with the coaching staff.

But the kicking job is under the most intense scrutiny and there are plenty of names to watch.

Will Kline, a senior walk-on, handled kickoff duties last season. He’ll have a chance to win that job again. He’s also listed as the back-up punter behind Parker.

On July 31, recruited walk-on kickers Jack Driggers of Tallahassee, Fla., and Jackson Hubbard from Dallas, Texas, will be on the practice field to compete for the starting job with Reed.

Driggers is said to have the strongest, most accurate leg of the group. He’s looking good for the kickoff job if nothing else. But Duke desperately needs a reliable field goal kicker.

The Blue Devils averaged 23.3 points per game last season, the first time their scoring average dropped below 30 points since 2011. A couple of made field goals per game would boost that average back up where Duke needs it to be.