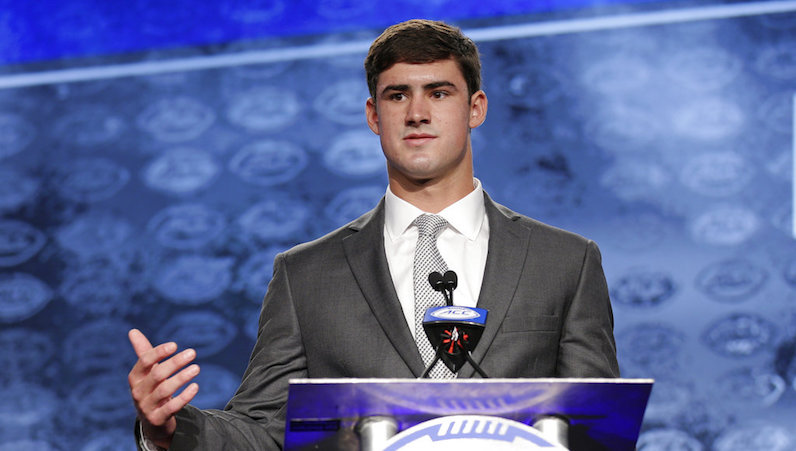 Duke looks to boost its scoring output back up over 30 points per game; the Blue Devils have a big weapon in that quest, too, thanks to quarterback Daniel Jones.

A redshirt sophomore, Jones started all 12 Duke games last season; he took his lumps, and learned valuable lessons while the team went 4-8 and a dismal 1-7 in the ACC.

But Jones, equipped with a strong arm, solid build and quick feet, is seen as the solution to that problem.

Coach David Cutcliffe said he’s certain this will be the deepest, most talented team he’s had at Duke. It all starts with Jones.

“I can promise you this: I am very grateful that we have a quarterback that’s a returning starter,” Cutcliffe said. “I just hope and pray we can keep him healthy.”

Jones threw for 16 touchdowns and ran for seven more last season. Though he was intercepted nine times, the majority of them came in the season’s first five games. Five of his interceptions came in a 21-point home loss to Virginia.

He ended the season by throwing 173 consecutive passes without an interception.

Daniel Jones worked in the offseason to increase his strength and conditioning. He also had conversations with Peyton Manning, when Jones worked the Manning Passing Academy as a counselor, and former Duke and NFL quarterback Thaddeus Lewis. And he’s been on the field on his own throwing to his wide receivers.

“I mean, a large part of any quarterback’s success is the people around them, and the coaches obviously have a huge impact on that,” Jones said. “You know, I would say collectively as an offense, we have a great chance to be a dynamic, explosive offense when you look at the people we have coming back and some of the guys that even haven’t played as much that maybe y’all haven’t seen as much. We’re certainly excited of the possibilities and what we can be as an offense. That’s a big part of my success and everyone else’s success is how many weapons and how many ways we can move the ball and score points.”

Some of the unknown players Jones referenced are at wide receiver. Redshirt sophomore Keyston Fuller (broken bone in knee) and redshirt freshman Scott Bracey (hamstring) suffered injuries that kept them out last season. Jones said both have had “big, big summers” and should be able to help this season.

But Daniel Jones is the key to it all. Having him back to anchor the group, Duke should be poised for a strong year of offense in 2017.