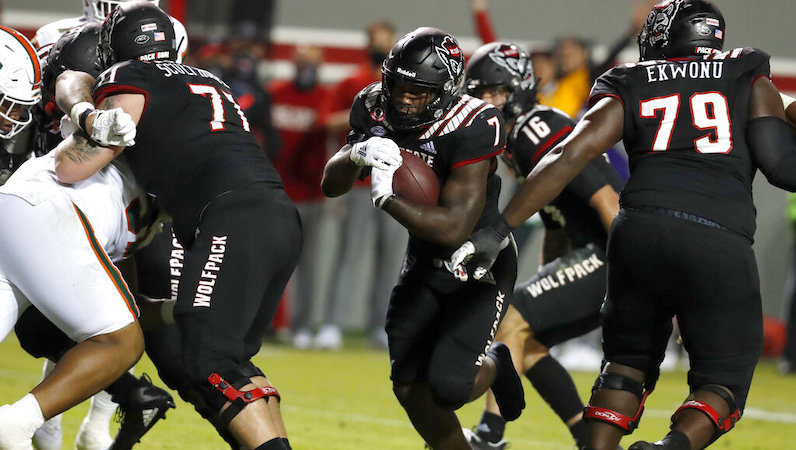 N.C. State running back Bam Knight (7) scores on a one-yard touchdown run without his shoe during the second half of Miami’s 44-41 victory over N.C. State at Carter-Finley Stadium in Raleigh, N.C., Friday, Nov. 6, 2020.

NC State will return plenty of talent in 2022; however, the Wolfpack must be ready for a fair amount of turnover at the running back position. Bam Knight will follow Ricky Person Jr. and declare for the 2022 NFL Draft.

Given that Knight waited to announce, it seemed likely that he was headed for the NFL, although, like Person, Knight planned to play in the Holiday Bowl.

While sharing carries, Knight and Person have been offensive mainstays for NC State the last few seasons. However, Knight was also known for his work on special teams.

One of the top in-state running backs in the 2019 recruiting class, Knight initially committed to Duke — before flipping in the summer of 2018 to NC State.

Knight and Person combined for 275 carries and 1,379 rushing yards this season. Behind those two, sophomore Jordan Houston recorded the most carries among NC State running backs: 20 carries for 83 yards and a touchdown.

There’s still plenty of talent at the running back position for NC State; the Pack could look to fill in the gaps with what’s already projected for the 2022 roster. However, this team also seems like an excellent candidate to look for a veteran back in the transfer portal.