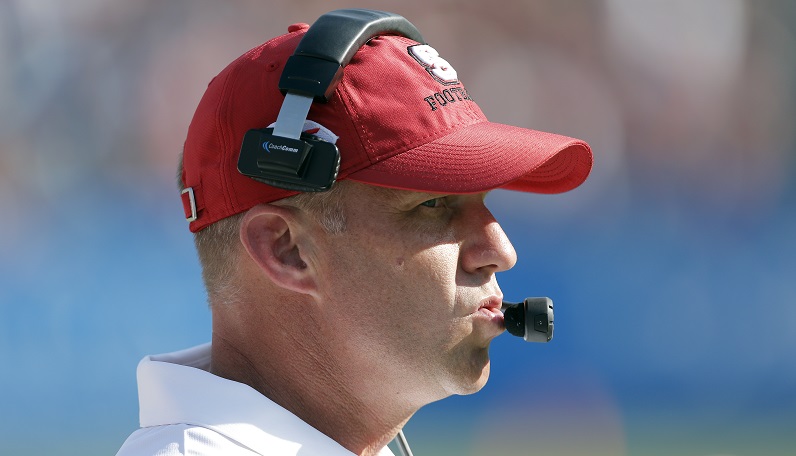 After one season with NC State, kicker Carson Wise has left the football program. The graduate transfer from Division II Carson-Newman joined NC State last March. Wise received a medical hardship, according to Joe Giglio of the News & Observer. He will remain on scholarship, but is unable to play.

Kicker Carson Wise won't be back at N.C. State for the 2018 season. Wise received a medical hardship (still on scholarship but physically unable to play)

Wise ended up splitting the place-kicking duties with Kyle Bambard, who wasn’t much better — if at all: 4-of-8 on field goal attempts. According to Football Study Hall, NC State ranked 126th nationally in field goal value (per kick).

Under Dave Doeren — ever since Niklas Sade finished up his eligibility — NC State has experienced its fair share of kicking game issues. For his career, Bambard is just 16-of-32 on field goals.

In the three seasons since Sade exited, NC State is 5-8 in one-possession-games (score within eight points). Three of those defeats came against top-20 teams, including two losses against top-10 Clemson teams — one of which was against the 2016 national champions. In all three of those games, the Wolfpack missed at least field goal.

Kick the can until next season

Bambard returns for his senior season in 2018; according to Giglio, he will take care of kickoff duties for the Pack. For his career, Bambard has recorded 126 kickoffs for a total of 7,515 yards (59.6 yards per kick) and 32 touchbacks — a touchback rate o 25.4 percent.

In both seasons with Bambard as the primary kickoff guy for NC State, the Pack has finished outside the top 100 in Success Rate, per Football Study Hall.

A possible positive addition for NC State, though: the 2018 season brings the long-awaited arrival of true freshman kicker Chris Dunn.

Dunn committed to NC State more than two years ago — the summer of 2016, before his junior season at North Davidson (NC) High School. He won the starting place-kicking job in the spring this year.

Without Yurtseven, can Markell Johnson remain one of the top PNR creators in America?