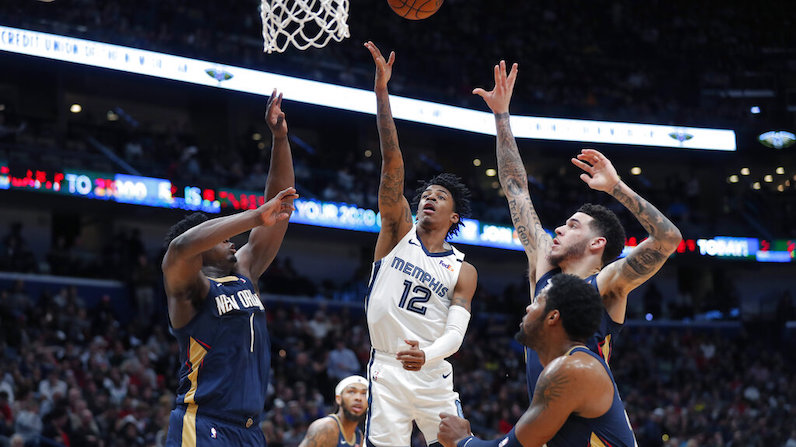 During today’s episode of First Take on ESPN, NBA analyst JJ Redick called out another alum of the The Brotherhood, Zion Williamson. This came as a result from comments made during the NBA All-Star Weekend by guard CJ McCollum, who was recently traded from Portland to New Orleans.

McCollum is Williamson’s newest teammate; however, Williamson, who is currently rehabbing a foot injury and away from the team, has yet to speak with Zion.

McCollum tells TNT broadcast crew, “I know about as much as you do right now. But I’m going to get to the bottom of it.” pic.twitter.com/KXfBBn5tym

Redick took issue with this lack of communication from Williamson:

Drafted No. 1 overall in the 2019 NBA Draft by the New Orleans Pelicans, Williamson’s professional career is off to a precarious start.

JJ Redick goes IN on Zion. Very glad former teammate is calling him out like this. You're gonna wanna watch thishttps://t.co/DKpzi8ygqs

During his rookie season (2019-20), Williamson appeared in only 24 games; New Orleans was extra cautious with its star player as he recovered from arthroscopic knee surgery. Williamson missed the first 44 games of the season.

Prior to the start of the 2019-20 season, Williams played in NBA Summer League games with the Pelicans. Although at the time, Duke coach Mike Krzyzewski mentioned that he didn’t think Zion should’ve played in those contests. Via Adam Zagoria:

No, I thought really he never should’ve played just because he’s been on this circuit of awards, the ESPYs, everything. I don’t think he’s in the playing shape or the mental shape to play.

Once he got on the floor, though, Zion immediately had an incredible impact in the regular season. The 2019 ACC Player of the Year averaged 22.5 points per game, while shooting 58.3 percent from the floor. This stretch of games included the team’s lackluster participation effort in the NBA Bubble.

When Zion returned for his second season, he emerged as one of the top 10-12 players in the NBA. Williamson averaged 27.0 points per game and shot 61.1 percent from the field. He was named an All-Star; things seemed ready to take-off, despite New Orleans missing the playoffs, once again.

What’s followed, however, is quite the opposite. While battling an injury with his foot, Williamson announced that he’d be ready for the start of the season, following surgery. (There were reports that Williamson showed up to training camp weighing close to 330 pounds.)

Williamson has yet to play in a game this season. In fact, he’s not even currently with the team. Back in January, it was announced that Zion would conduct his rehab in Portland, Oregon, away from the Pelicans.

All of this is backdropped by what seems to be a fair amount of distrust from the organization and Zion’s camp, which is led by his stepfather, Lee Anderson.

There’s more to this story, obviously. At this point, fans of the game just want to see Zion Williamson healthy and playing basketball. He’s a unique talent and incredibly fun to watch. Unfortunately, a tangled web of injuries, mistrust and poor communication have pushed things to this ugly point.

JJ Redick is a Duke guy, a CAA guy and someone with a personal grudge against David Griffin.

For him to light Zion up as a bad teammate and not invested in the franchise or his career, is the most damning condemnation I can think of, short of a current teammate doing it.

Redick has keen insight with Williamson, too. The two were teammates for two seasons in New Orleans (2019-21).

During the 2018-19 season, I covered Zion Williamson up close at Duke. It was one of the greatest individual seasons in college basketball history. Legendary stuff. Beyond his profound talents, though, Williamson appeared likable and seemed to be an excellent teammate.

A lot can change in a short period of time; the NBA is obviously different from college, too, to be clear. The stakes a higher now, which matters as well. Williamson, 21, won’t turn 22 until July, yet he has plenty of eyes and ears tracking his every move.

That can’t be easy, and people are allowed to make mistakes, although it must be tough to feel tugged in between two obligations. Williamson has an an employer, yet his family is in the picture, too.