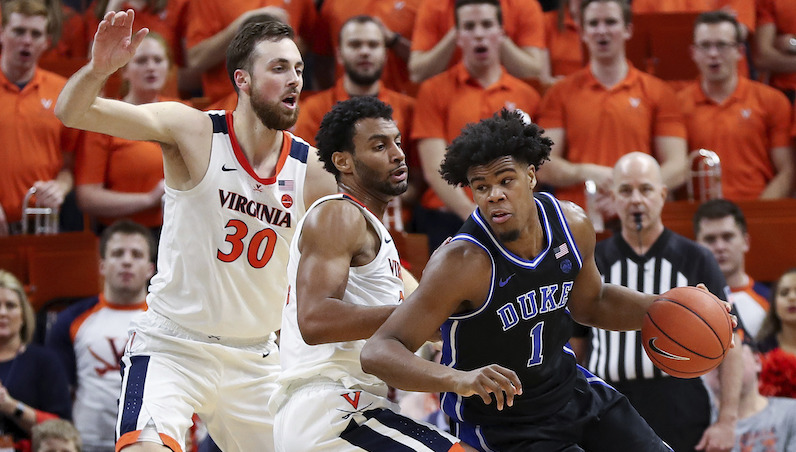 Jay Huff will return for his senior season. This just in: Virginia is poised to be very good, once again. On Saturday, Huff announced plans to withdraw from the NBA Draft and return to Virginia for his redshirt senior season.

After appearing in 34 games during Virginia’s 2018-19 national title season, Huff took on a larger role during his redshirt junior season. The 7-foot stretch-5 made 18 starts; Huff averaged 25 minutes per game, up from 9.3 minutes the year prior. Huff shot 75.3 percent around the rim, while averaging 8.5 points, 6.2 rebounds and 2.0 blocks per game.

Virginia's Jay Huff is withdrawing from the 2020 NBA Draft and returning to school next season, per his Instagram page.

NCAA draft prospects had until Aug. 3 to withdraw from the draft.

With Huff back, Virginia is absolutely loaded. Mamadi Diakite and Braxton Key depart, but with Sam Hauser eligible now and Huff, the Cavaliers can play some five-out basketball next season. Huff splashed 19 3-pointers this season (35.8 3P%).

With Virginia's roster construction, would imagine Hauser sees most time as the de facto 4, used in ways similar to Dre Hunter in 18-19. But it'll be interesting to see just how much Hauser is used as off-ball/off-screen shooter in UVA's h-c offense, specifically blocker-mover pic.twitter.com/X62Yah2qih

Huff isn’t the smoothest defender in space, though he’s made serious improvements in the pick-and-roll since arriving in Charlottesville. Virginia projects as the No. 1 defense nationally for the 2020-21 season; a big part of that will be Huff, who ranked 17th nationally with an 11.1 percent block rate.

A former 4-star recruit, Huff redshirt during the 2016-17 season. Huff arrived at UVA during the same famed 2016 recruiting class that also brought De’Andre Hunter, Ty Jerome and Kyle Guy, all now in the NBA.

Tony Bennett will have plenty of options to mix and match with next season. Kihei Clark is back to run the show at point guard. Tomas Woldetensae is one of the better movement shooters in the ACC, too. Can Casey Morsell shrug off a tough freshman season? If so, he has plenty to offer, too.

Virginia also adds a superb 2020 recruiting class to the mix as well. Jabri Abdurh-Rahim and Reece Beekman, both 4-star prospects, will be ready to contribute from the jump.