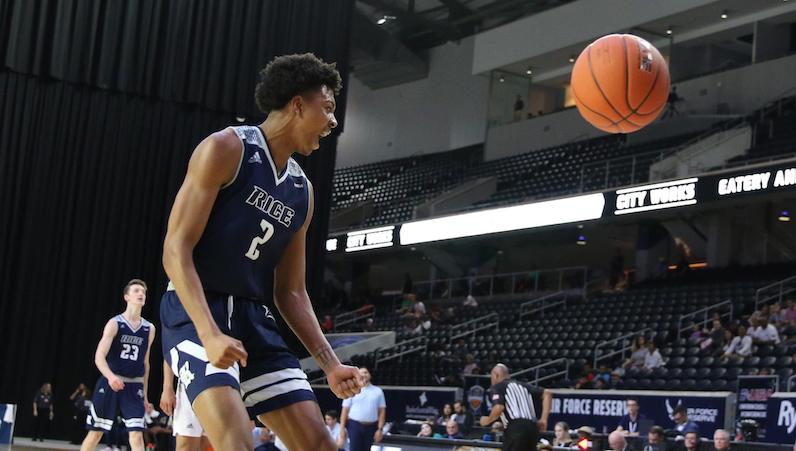 The 6-foot-8 Murphy just finished his sophomore season with Rice: 13.7 points and 5.5 rebounds per game. During that two-year run, Murphy shot 39 percent on his 3-point attempts (5.8 3PA per game). Over 72 percent of his career field goal attempts are of the 3-point variety.

Murphy committed to Virginia over Pittsburgh, Villanova and Houston.

The expectation is for Murphy to not seek a waiver to immediately play next season. He will redshirt during the 2020-21 season.

As he told Evan Daniels of 247 Sports, Virginia’s blocker-mover offense helps create opens shots, which is part of the program’s appeal: “They are one of the best defensive teams in the country and that is vital to my success and development and offensively they get their shooters open and get good shots.”

Murphy has other positive shooting indicators, too. He shot 78 percent at the rim this season — with 19 dunks. For his career, Murphy hovers just below 79 percent shooting from the free throw line as well.

According to Synergy Sports, Murphy posted an effective shooting rate of 51 percent on spot-up no-dribble jumpers this season. On a smaller sample (21 possessions), Murphy shot well coming off screens, too (58.8 eFG%).

As a sophomore, Murphy was one of five Division I players 6-foot-8 or taller (along with Villanova’s Saddiq Bey) to shoot at least 35 percent on 175+ 3-point attempts. During the 2018-19 season, only 11 players accomplished this, too, including Cameron Johnson, Dylan Windler, Mike Daum and Sam Hauser, Murphy’s future teammate.

During his freshman season, Murphy was one of the better catch-and-shoot players in the country: 64.6 percent effective shooting — No. 75 in Division (90+ possessions).

Murphy is more than just a standstill shooter, though. He moves well without the basketball, and has some solid up on his second jump.