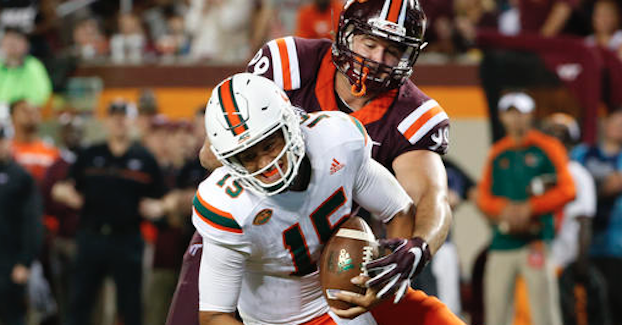 Think of it like this: He has an early ‘80s American sports car in his garage he’s trying to restore, so he can drive it on Saturdays. The car runs. That’s good.

But though there are plenty of cosmetic upgrades he needs to make — the seats are in disrepair, the backs torn and bottoms worn, the dash is faded, two windows cracked — those aren’t the real problems that prevent this car from being showroom-worthy.

The engine makes faint groaning sounds every time it starts. The steering column needs to be replaced. The floor is rotting in places. Rust covers the underbelly.

This is a beauty of a car, but it’s not going far or fast until he does about a year’s worth of projects. Maybe two.

That’s a long way of saying Miami has some wonderfully promising pieces, but a long way to go before Richt can hop in and speed along the road to ACC title contention.

It was evident in the way the Hurricanes ran out of gas against Virginia Tech on Thursday. Fully fueled teams can power through whatever the schedule presents. Miami, still light in scholarships and decimated by injuries, was playing its third game in 12 days and using a host of players who would not see the field if UM had its program where Richt wants to take it.

UM lost its top three tacklers to an NCAA situation this past summer, several more players to season-ending injuries and, because of physical wars against Florida State and North Carolina, was missing its starting right tackle, both defensive ends, a cornerback, a key defensive tackle and had numerous others playing hurt. Injuries are common occurrences in a contact sport as the season wears on, but Miami’s personnel losses — and the fact it is still fighting the NCAA-mandated loss of few scholarships because of the Nevin Shapiro scandal — led to unfavorable situations Thursday.

Situations such as this:

On the drive it allowed its first touchdown, Miami’s front seven consisted of a hard-working but not ultra-quick backup defensive end (Trent Harris), a potential future star at defensive end who is forced to play as a true freshman (Joe Jackson), a backup tackle who has made little impact in three seasons (Courtel Jenkins), a reserve tackle who is simply not ACC-caliber (Ryan Fines), a linebacker whose promising career has been wracked by knee injuries (Darrion Owens) and two lightly recruited linebackers who haven’t done much at UM (Charles Perry, Mike Smith). Miami had to play them to give its starters a break. The drive was over quickly. They allowed a 52-yard play, committed a personal foul and gave up a passing touchdown in short order.

That’s one example of a position group that needs restoring. The offensive line is in worse shape; even the starters aren’t getting it done there. Miami could lose its quarterback, its top receiver (both of whom were fighting injuries recently) and will graduate most of its secondary. The depth beyond them is scary.

At 4-3 and 1-3 in the ACC, Miami’s season is hanging in the balance, and this tough October stretch is showing how Richt needs to do a little more than add the gas and oil of a 2017 recruiting class to get this machine humming again. It’s probably going to take a few years before he’ll have the envy of the other car obsessives in the neighborhood.