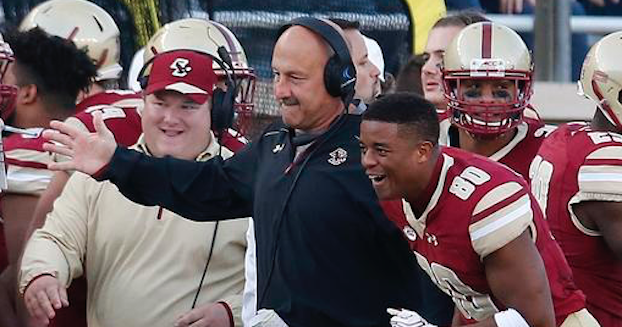 Signing Day is here, which means coaches and athletic departments can finally talk publicly about the majority of their incoming football recruits.

Throughout the day, Twitter will be dominated by graphics and videos as coaches welcome these prospects with open arms. So far, one video in particular caught our eye:

Got ourselves a bunch of #dudes on #NSD this year! #DecideToFly pic.twitter.com/mEJdQdIuYb

Yes, that is Boston College coach Steve Addazio hyping up his recruiting class while doing a spin-off of the Sopranos opening theme. He even included his trademark “dude” talk at the end.

But something about this looks familiar. Didn’t Chuck Amato and NC State do something like this going into their 2002 matchup against Georgia Tech?

Hey, both videos are fantastic, and it certainly beats watching Lane Kiffin pretend he’s not miserable while talking up FAU recruiting.