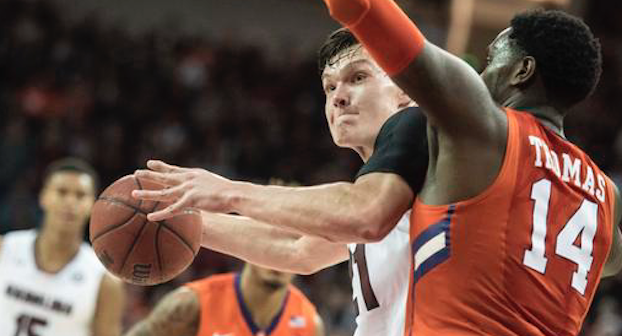 Clemson’s 62-60 victory over South Carolina in Columbia on Wednesday gives the Tigers a 9-2 record heading into their Dec. 28 game against UNC-Wilmington.

The Tigers got a huge spark in the South Carolina win from Elijah Thomas, a 6-9 sophomore forward who was making just his second career appearance for Clemson. Thomas logged 26 minutes against the Gamecocks, hitting four of six shots from the field and scoring 12 points. He added seven rebounds, a blocked shot and a steal.

Thomas signed with Clemson as a mid-year transfer in December 2015 after he made the decision to transfer from Texas A&M. He was a consensus top-50 prospect coming out of high school, and multiple ACC schools, including Louisville and NC State, expressed interest.

Thomas became eligible after sitting out spring semester of last season and the first nine games of the 2016-17 campaign. With a deep rotation that includes six players averaging 9.7 or more points per game, Clemson is harboring aspirations of returning to the NCAA tournament in 2017 after missing five straight.

Blossomgame is again one of the ACC’s leading scorers with an average of 17.4 points per game, while Grantham is averaging 10.5 points and 5.5 rebounds an outing. Djitte is averaging 7.9 points a contest, while leading the Tigers in rebounding with 9.4 per game.

Thomas is another productive player in the mix — one who could pay huge dividends for the Tigers in ACC play.