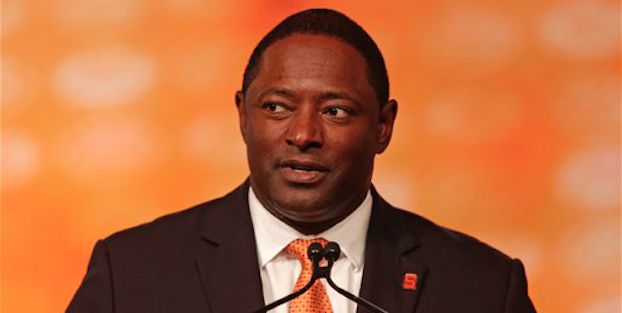 Dino Babers and his staff are less than three weeks away from signing their first full recruiting class at Syracuse. (AP Photo)

With less than three weeks to go before National Signing Day, Syracuse sits at 22 commitments, with just a couple spots to fill.

Since arriving at Syracuse a little over a year ago, Dino Babers and his assistants have made it their mission to remake the Orange roster with athleticism — the type of athleticism and speed that’s essential to make a crack in the uber-competitive ACC Atlantic. So far, they’ve found marginal success, which they’ll be looking to build on in the 2018 class.

The Orange didn’t fare much better in recruiting under former head coach Scott Shafer, which is one major reason why he’s no longer at Syracuse. Despite over-signing with 29 prospects in the 2015 class, Syracuse’s class ranked No. 58 nationally that year.

Only Syracuse’s 2014 class, which ranked No. 50 nationally, is superior to this year’s Orange class over the past five recruiting cycles.

Under Babers, Syracuse has made recruiting wide receivers and defensive backs a particular focus.

The addition of even one or two extra skill players per recruiting cycle can pay major dividends for the Orange in the future. Since defensive backs and receivers often participate on special teams, the Orange stand to improve in all three phases by adding more speed.

It’s going to take more time for Syracuse to emerge as a serious contender in the Atlantic. But the program is heading in a positive direction on the recruiting trail, which is the only way for the Orange to make a move.