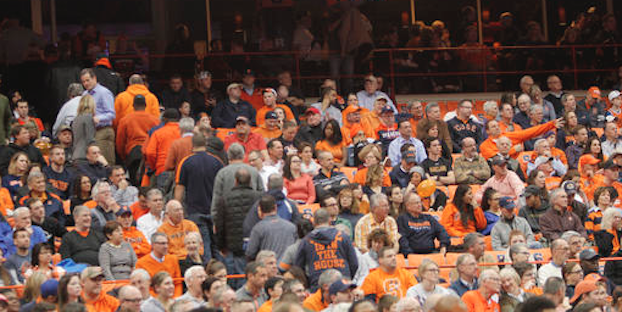 Coming off a Final Four appearance last spring, Syracuse figured to be strong this season.

The Orange returned All-ACC-caliber forward Tyler Lydon, and the transfers of Andrew White III and John Gillon gave the team a chance to be even better.

But despite a No. 19 ranking in the AP Top 25 preseason poll, the Orange were blown out by double-digits in back-to-back games against South Carolina and Wisconsin in late November. They also suffered a 52-50 loss to UConn and most recently dropped two more to former Big East rivals Georgetown and St. John’s.

The Wednesday loss to St. John’s was deflating as the Orange shot 32.8 percent from the floor and committed 19 turnovers. They allowed the Red Storm to shoot nearly 69 percent in the second half on the way to a 93-60 outcome in the Carrier Dome. The blowout dropped Syracuse to 7-5.

Syracuse ranks 11th in the ACC in scoring offense (76.4 PPG), 11th in field-goal percentage (45.6 percent) and last in free-throw shooting (64.2 percent). The Orange are also struggling stopping opposing teams from getting rebounds. They are at the bottom of the ACC in rebounding defense, allowing opponents to grab 37.8 boards per contest against them.

Lydon, expected to be the team’s top player, has improved his three-point shooting and rebounding. He’s also jumped from an average of 10.1 to 12.2 points per game, though his assists, steals, field-goal and free-throw shooting percentages have all dropped.

There are some promising signs as the Orange lead the ACC in steals, rank second in made three-pointers, third in assists and fourth in blocked shots. Franklin Howard is leading the league in assists, while senior transfer Andrew White III is leading the league in three-point conversions. Three Syracuse contributors — Howard, White and Gillon — all rank among the top nine in the ACC in steals.

If the Orange can improve their defensive rebounding and free-throw shooting, Boeheim’s club can improve dramatically once ACC play gets going.