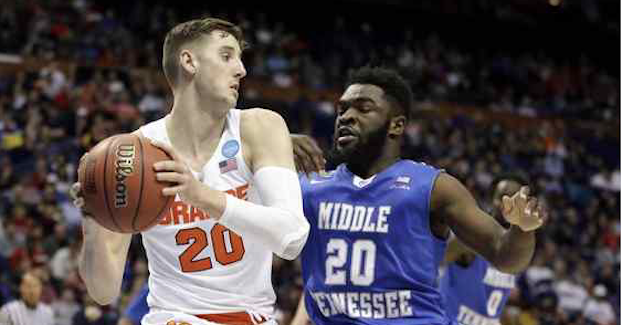 Will Tyler Lydon (left) declare for the 2017 NBA Draft after his sophomore season. (AP Photo)

Syracuse has gotten used to losing some of its best players early in recent seasons, as have other top teams around the ACC. Just in the past few years, the Orange have lost Chris McCullough and Malachi Richardson after one year and could be facing a similar situation with incoming guard Tyus Battle after next year.

Although Tyler Lydon, Syracuse’s 6-8 returning power forward, opted to stay in college after his freshman year, he stands a realistic chance of making a lot more money next summer.

Earlier in July, Orange head coach Jim Boeheim suggested that he’s already planning ahead for the 2017-18 season in anticipation that Lydon won’t be on the squad. He told Adam Zagoria of SNY at the recent Peach Jam in North Augusta, S.C., that “three of those guys are going to be gone next year, Tyler, Tyler, and DaJuan.”

Tyler Roberson accounts for one of the Tylers Boeheim was mentioning, and of course DaJuan Coleman is the other player who will be departing after his upcoming redshirt senior season. But given that early projections place the aggressive, athletic Lydon in the top 25 of the 2017 NBA Draft, it makes sense that the Orange went ahead and signed Taurean Thompson, an in-state power forward who can come in and spend a year working steadily into the rotation before he becomes a major contributor as a sophomore.

The Orange should have a pretty deep post rotation this coming year with Lydon, Roberson, Coleman, Thompson, center Paschal Chukwu, who had to sit out last season after transferring from Providence, and incoming freshman Matthew Moyer. If Syracuse can make up for the perimeter production lost by departed seniors Michael Gbinije and Trevor Cooney, another Final Four run next spring isn’t entirely out of the question.