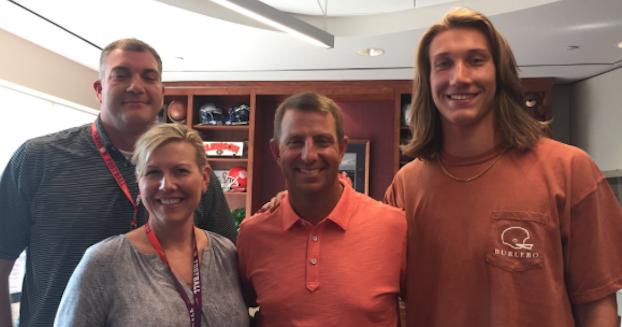 Clemson hasn’t had much trouble locking up coveted quarterbacks during the Dabo Swinney era. That continued to hold true when the Tigers landed the No. 1 player in the 2018 class.

Trevor Lawrence of Cartersville, Ga., committed to Clemson on Thursday. The 6-6, 196-pound signal-caller is ranked the No. 1 overall prospect in his class by Scout, Rivals and 247Sports.

Please respect my decision and no interviews 🐅 pic.twitter.com/ouXRGGcqvf

According to MaxPreps, Lawrence completed 63.4 percent of his passes as a junior at Cartersville High School for 3,708 yards and 49 touchdowns, tossing only nine interceptions. He led his team to the Georgia 4A state title for the second straight season.

Lawrence will have plenty of competition at quarterback once he arrives at Clemson. Three passers on the current roster — sophomore Kelly Bryant, redshirt freshman Tucker Israel and true freshman Zerrick Cooper — have remaining eligibility through what will be Lawrence’s freshman year, while consensus 5-star recruit Hunter Johnson and 4-star Chase Brice are committed to Swinney’s 2017 class.