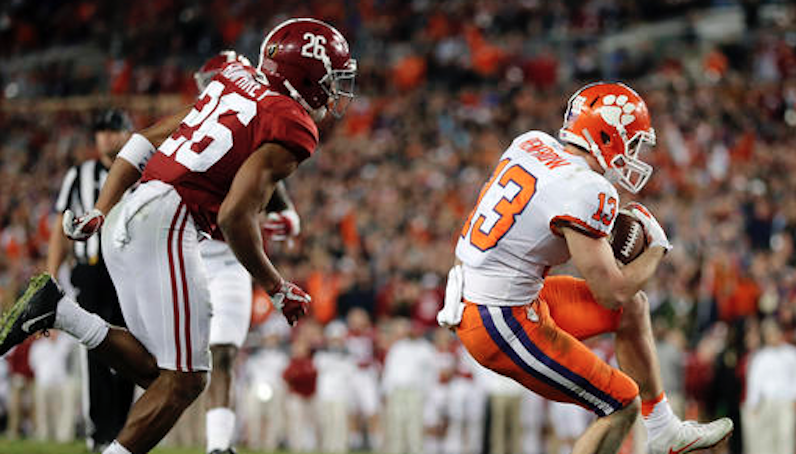 Hunter Renfrow (13) is among the key players returning to Clemson next fall. (AP Photo)

The quarterback battle in the spring will include a talented group of young signal-callers. Kelly Bryant has the most collegiate game experience, but he will be pushed hard by Zerrick Cooper and Hunter Johnson. Cooper redshirted this past fall as a freshman, while Johnson, a consensus 5-star recruit, enrolled at Clemson earlier this week.

With just one starter to replace up front offensively, Justin Falcinelli will succeed Jay Guillermo as Clemson’s starting center. At left tackle, the Tigers have a bona fide All-American candidate in Mitch Hyatt. Clemson is also expected to return another first-team All-ACC offensive lineman in right guard Tyrone Crowder.

At running back, C.J. Fuller, Tavien Feaster, Adam Choice and Tyshon Dye will compete this spring. At wide receiver, some of the options for Clemson’s quarterbacks will include national championship game hero Hunter Renfrow, along with Deon Cain, Ray-Ray McCloud, Cornell Powell, Diondre Overton and T.J. Chase. Then, in the summer, the Tigers will add highly touted pass-catchers Tee Higgins and Amari Rodgers.

Defensively, Clemson brings back one of the top fronts in all of college football. Only fifth-year senior Carlos Watkins is leaving. Starting defensive ends Clelin Ferrell and Christian Wilkins, as well as standout defensive tackle Dexter Lawrence, are all returning. Albert Huggins and Scott Pagano will battle for the other interior position.

At linebacker, Clemson loses only Ben Boulware, while in the secondary, the Tigers must replace cornerback Cordrea Tankersley and safety Jadar Johnson.

Clemson will be hard-pressed to repeat as national champion with all the talent it’s losing. But Dabo Swinney and his staff have recruited tremendously in recent years. The dropoff won’t be as significant as some might be expecting.