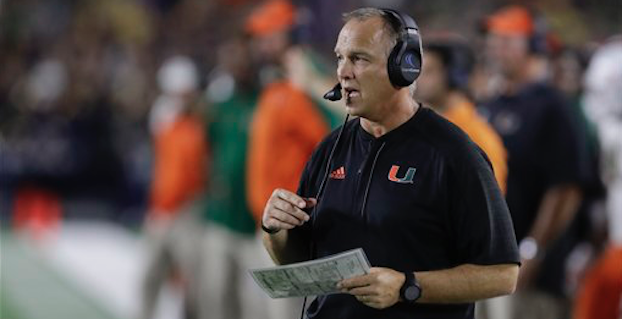 Miami football coach Mark Richt and his staff have a quarterback battle on their hands. (AP Photo)

The Hurricanes have seven commits as of now, headlined by 4-star cornerbacks Josh Jobe and Gilbert Frierson. Both are 6-1, 180-pound, top-100 players. Jobe is rated the No. 12 cornerback nationally, per 247Sports’ composite rankings.

Receiver Daquris Wiggins is another 4-star recruit Miami will want to hold onto. He and Jobe, along with 3-star running back Jalen Patterson and 3-star corner Thomas Burns, committed to Al Golden. Frierson, 3-star offensive guard Delone Scaife and cornerback Demetrius Ivey gave their pledges to Mark Richt.

The Hurricanes’ class is ranked No. 3 nationally, but that’s more a function of them having a bunch of early commits rather than it being a star-studded cast.

Could one of those players be on the way out? What are Miami’s top positions of need? Who are the Hurricanes’ top targets? Become a premium member of ACCSports.com to see the rest of the article!