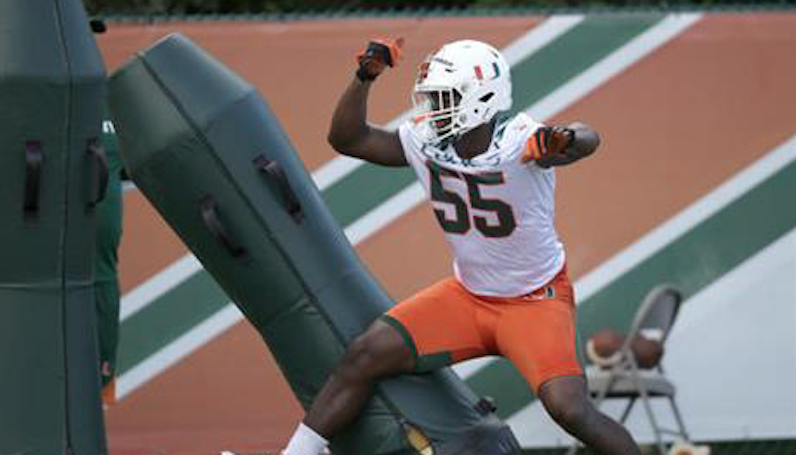 Recruiting analysts have their days in the sun in the month or so before Signing Day. Wednesday will be their day in the brightest spotlight. They will trumpet the success and pooh-pooh the failures of teams all across the country. Fans will gobble up opinions on how their team fared, some taking it as gospel truth and a predictor of how their boys will fare in the upcoming years.

All of it means little.

And if you need proof of that, look no further than the Hurricanes’ 2016 recruiting class.

Miami’s group was seen as a good, but not great, group last Signing Day. It ranked 21st, according to 247Sports’ composite ratings. It had several players of blue-chip quality, but not enough of them to be seen as a difference-making unit.

Well, here’s the reminder for Signing Day: Wait for things to play out.

UM’s top-rated recruit, 4-star wide receiver Sam Bruce, was dismissed before playing a game and is now in junior college. Another 4-star wideout, Ahmmon Richards, made the most of his opportunity. He had more receiving yards than any freshman nationally and broke the 31-year-old Miami record set by a guy named Michael Irvin.

The Hurricanes were quietly excited by Joseph Jackson, a 4-star defensive end, believing they could redshirt and develop him. But the dismissal of NFL Draft prospect Al-Quadin Muhammad in August pushed Jackson into the rotation, and a rash of injuries in October moved him into a starting role. How did he do? He had more sacks (8.5) than any teammate and more than any freshman nationally other than Florida State’s Brian Burns. He also led the Hurricanes in tackles for loss (11.5).

Because of the dismissal of arguably its best defensive player, Jermaine Grace, the subsequent jettisoning of contributor Juwon Young and graduation losses, Miami went into the year starting three true freshmen at the linebacker spots for the first time in its 90-year program history. No other team started more than two freshmen in opening week at any position, and no team in the country had more than one freshman starting on defense.

Shaq Quarterman, Michael Pinckney and Zach McCloud anchored a D that finished 12th nationally in points allowed (18.5) and 17th against the run (3.43 yards per carry). The fact Miami’s defense was that good, with that kind of youth, is remarkable. Those three linebackers, plus Jackson, senior-to-be Chad Thomas and junior defensive tackles Kendrick Norton and R.J. McIntosh, make up what is expected to be one of the best front sevens in the land.

This fall, opportunity will strike for several players in that 2016 group. Quarterback Jack Allison, who redshirted, could take over for the departing Brad Kaaya. Receiver Dionte Mullins and running back Travis Homer will get touches. Safety Romeo Finley and cornerback Malek Young will see their roles increase mightily with UM’s four starting defensive backs graduating.

And though Miami’s 2017 recruiting class is expected to be good — possibly top-10, if Mark Richt and Co. close the way many are expecting — wait until this time next season to form your final opinion.