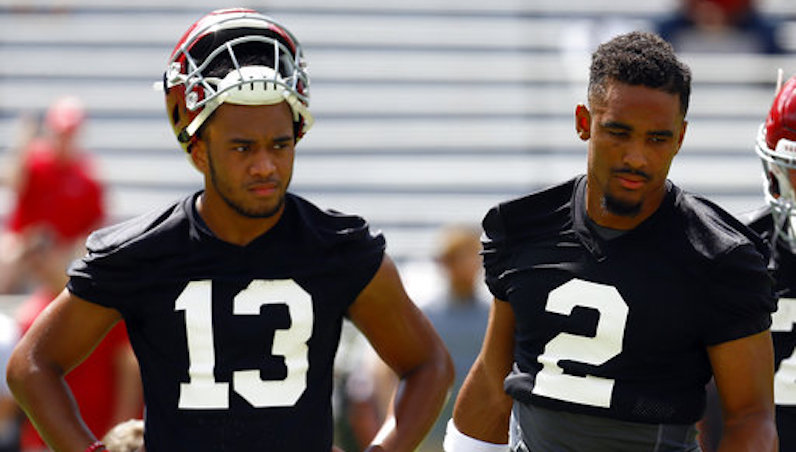 Let’s start this post with an announcement: this is completely unsourced speculation. For a variety of reasons, I don’t actually think this will happen. However, it’s an interesting thought experiment.

Over the offseason, one of the Official Talking Points Of College Football has been the Jalen Hurts saga at Alabama. Ever since the second half of the national championship game, this has been a buzzworthy topic: Who starts at quarterback for Alabama in 2018? And when that decision becomes official, what’s the collateral damage?

With the outstanding performance of Tua Tagovailoa in the title win over Georgia, Jalen Hurts — 61 career total touchdowns in 29 games — may be reduced to the backup role. Or at least that’s the indication — perhaps prematurely — out of Tuscaloosa.

Now, there are worse roles in college football than backup quarterback at Alabama. You get to win all the time, contend for titles and Nick Saban probably yells at you less than the starter. That all seems pretty good. But for a guy like Hurts, the 2016 SEC Offensive Player of the Year, it’s working in reverse, right?

Hypothetical: Is there an ACC program that appeals to Jalen Hurts?

Short answer: probably not, unless you want to factor Notre Dame into the discussion. A little over two years ago, Jalen Hurts was a high-level 4-star recruit out of Channelview, Texas — not too far from downtown Houston. Hurts was rated as a top-200 prospect, and the No. 4 dual-threat quarterback in the 2016 class, per 247 Sports.

The 6-foot-2 QB had well over a dozen offers, plus a host of other programs interested — the majority of which came from west of the Mississippi River. In the end, though, Hurts committed to Alabama — with Lane Kiffin as the lead recruiter — over Texas A&M. He pledged to the Crimson Tide in June 2015 — a few months before the start of his senior season.

According to 247 Sports and ESPN, no ACC program offered Hurts, who seemed destined to end up in the SEC or Big 12. (Brian Kelly and Notre Dame did, however, show interest in Hurts; perhaps the Irish, who have some question marks at quarterback, try to get back in on Hurts, too.)

If Hurts does decide to transfer from Alabama, which is far from a certainty, the junior quarterback could have two years of eligibility — depending on how things shakeout. It would also seem overwhelmingly likely that there would be a great deal of interest for his services, especially from his home state: football-crazed Texas.

What about NC State as a potential landing spot?

Again, I want to reemphasize: this is pure speculation. However, looking around at the ACC, it’s interesting to think of a few places Jalen Hurts could land, hypothetically speaking. Obviously, for a player of Hurts’s caliber, most if not all ACC teams would be interested. Their current circumstances would be secondary.

But only three of the top 10 ACC quarterbacks — in terms of total pass attempts in 2017 — are seniors in 2018: Ryan Finley, Eric Dungey and Kelly Bryant.

At Clemson, it’s a bit of a different story with Bryant, too: freshman sensation Trevor Lawrence is in town now. Whether he starts or not in 2018, Lawrence is a huge part of the picture going forward with the Tigers.

Syracuse is a fun offensive team; the Orange play super fast, throw the ball a ton and give the quarterback freedom to run. That has to be appealing to a young quarterback. However, Syracuse hasn’t gone to a bowl game since 2013, and has four straight seasons of four or fewer wins. Could that sink their appeal? (Plus, it’s a good deal away from Texas and Alabama.)

NC State presents an interesting package. The campus is located in one of the ACC’s bigger/growing cities, it’s in a warm-weather state and it appears to be a program on the rise, thanks to an eventual 2018 NFL Draft, a nine-win campaign in 2017 and the recruiting efforts of Dave Doeren’s staff.

Another thing Doeren and NC State could potentially sell Hurts on: success with transfers at the quarterback position. This is a staff that has already put one transfer quarterback into the NFL, and has another on the way. Plus: there’s playing time available in 2019.

Since Doeren took over in 2013 for the Wolfpack, NC State has attempted 2,143 passes across the last five seasons. Of that pile of pass attempts: 2,044 (95.6 percent) have come from the right arms of transfer quarterbacks:

Thomas was a holdover from the Tom O’Brien era, and Mitchell was a one-year grad transfer — used to help bridge a gap. However, Brissett and Finley were notable recruits — players the staff wanted to build around, despite some of the talent already on the roster. Both Brissett and Finley saw their production hit outstanding levels while in Raleigh, too.

Over the last two seasons, Doeren has brought in some promising quarterback recruits, like Matt McKay (3-star, 2017) and Devin Leary (4-star, 2018). This staff could be more than happy to turn the reins over to those guys, but the only person on NC State’s roster to attempt a pass in a game, other than Finley, is wide receiver Jakobi Meyers.

One more time through

However, it’s interesting to ponder: would Hurts give an ACC school — NC State, in particular — a shot if he decided to leave?