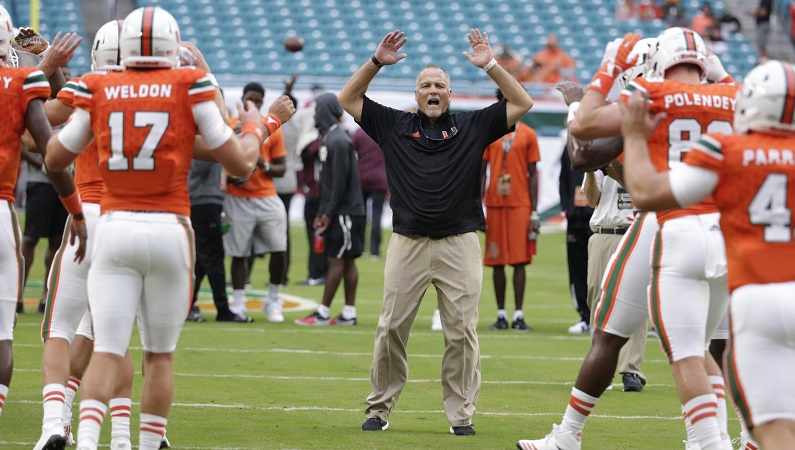 Zach McCloud expected to be powering through fullbacks and tight ends to get to running backs, not hauling tree branches to clear his family’s yard.

Kc McDermott expected to be working out at Miami’s practice facility, not running around his neighborhood trying to keep his wind up.

Jaquan Johnson expected to be seeing his mother after a game, not hanging out with her for in her shuttered home at the southern tip of Florida.

It has been a strange start to 2017 for the Hurricanes, who will end a 20-day break without a game Saturday when they take the field against Toledo. Two weeks ago, Hurricane Irma blew through the islands and South Florida on its way up the Southeastern U.S., causing devastation in the Caribbean and the Keys and damage and power outages all over South Florida. The threat of the one-time Category 5 storm, one of the Atlantic’s strongest ever, forced millions of people in its path to alter their plans.

Miami’s football team was no different. Though Irma’s winds and rain didn’t significantly damage its home, Hard Rock Stadium, or its campus, the Hurricanes, in a football sense, do have a bit of a recovery effort on their hands.

The storm did not care about Miami’s games at Arkansas State and Florida State. UM was forced to cancel one and the ACC postponed the other. The cancellation of the Arkansas State game – seen by some partisans in that part of the country as an overreaction – stripped Miami of a chance to tune up its offense before its ACC slate begins. UM wanted to play that game, on Sept. 9 in Jonesboro, Ark., but concern over the storm forced the Canes to cancel. As coach Mark Richt explained, he didn’t want his players and coaches worrying about a football game with a serious storm threatening their families, homes and livelihoods. There were issues bigger than football in play.

The Canes had a 10-day break without a practice, and players did what they could. Those able to flee South Florida found workout spots at their old high schools, their local town gyms, or running outside. Those tasked with cleanup from the storm – like McCloud, McDermott and Johnson, all locals who stayed and rode out the bad weather – lifted logs and did push-ups, while living on a diet of storm supplies. Players lost a little bit of their conditioning, but by the time the team regrouped in Orlando last week, they were on their way to getting their legs back.

That break in conditioning might show up in Saturday’s game against Toledo, which gains yardage in chunks thanks to standout quarterback Logan Woodside (ninth in FBS in passer rating; led FBS in touchdowns in 2016). It may take UM’s offense a little while to get in sync, given that new quarterback Malik Rosier still has yet to make his second start of the season. Rosier went without throwing for three days during the storm, but stuck close with coaches and studied his film. He and several receivers had makeshift practices at their team hotel, before the rest of the team joined them in Orlando for a regular week of practices leading up to the Toledo game.

Hurricane Irma didn’t care that UM was in the middle of a season, and the Canes can’t do much about it now. They’re seeing this as a reboot of 2017, a chance to come together and turn a negative into a positive.