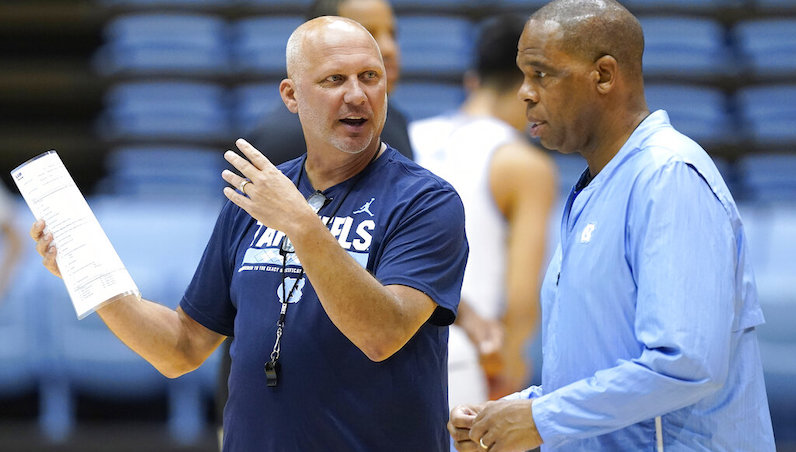 GG Jackson, one of the top players in the 2023 recruiting class, will make his college decision in the very near future. The 6-foot-8, 210-pound Jackson is a 5-star recruit and a top-10 prospect in his class, according to 247 Sports.

Jackson is considered, at this point, to be a likely UNC commitment. This would be a massive addition for Hubert Davis: the first 5-star commit of his head coaching tenure and a recruiting win over Duke.

Duke’s recruitment for Jackson is led by current associate head coach Jon Scheyer, who would be the program’s head coach when the blue-chip prospect arrives on campus. UNC assistant coach Jeff Lebo leads for the Tar Heels.

However, there’s no guarantee that Jackson makes his way to the ACC. The Gamecocks are the flagship program for his homes state of South Carolina. Clemson also offered Jackson; however, the Tigers are on the outside looking in.

An update from GG Jackson's official visit from his Instagram. pic.twitter.com/TeYTZPSYlT

The bond between Jackson and North Carolina is very real, although it’s clear that Duke made an impression during his official visit, which took place back in late January.

Over the weekend, GG Jackson posted a triple-double — 14 points, 13 rebounds, 10 blocks — as his team advanced to the finals of the state playoffs.

⭐️⭐️⭐️⭐️⭐️ G.G. Jackson’23 @GregJ2023 finished officially with 14 points, 13 rebounds & 10 blocked shots in a semifinal win for @RidgeViewHoops . #Georgetown assistant Louis Orr was in attendance. The Championship is on Thursday. He would like to make a decision soon afterwards. pic.twitter.com/uHVAkwnUNz

This means just one more game left in the 2021-22 prep season for Jackson, who is expected to make his decision shortly thereafter.