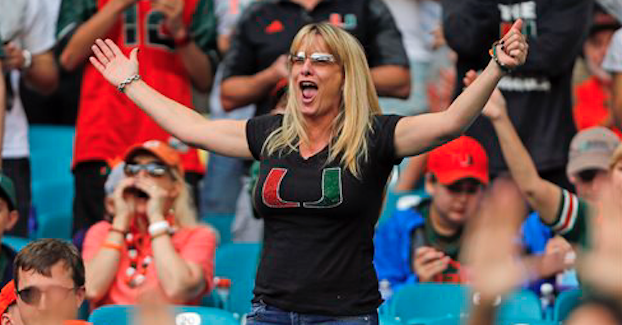 No one will actually come out and say it, in this politically correct era of sports. They’ll say they will be happy to play in any bowl game — that they will play their hardest and fight for a win to cap off the season the right way.

That might be true. But the real truth of Miami’s bowl situation is this: Players do not want to go back to Shreveport.

That has been an oft-repeated mantra in their locker room, according to those who are in it every week. The Hurricanes, who fell from No. 10 in the polls to 4-4 with a four-game losing streak, made an ironclad promise to each other at that time. They would not let themselves fall out of contention for one of the ACC’s top-tier bowl games. They would not again fall into the secondary group, which includes the Independence Bowl in Shreveport, La. That game, UM’s upperclassmen recall, is where Miami in 2014 lost and dropped to 6-7, finishing a dismal season that all but sealed coach Al Golden’s fate.

It’s nothing against the city of Shreveport and its people, who tried their best to make the Hurricanes feel welcome. But this proud group of players, wearing the ‘U’ that once stood for “unbeatable,” felt that game was beneath them. Going back to a lesser bowl like that would mark a return to the ways of the Golden era. Coach Mark Richt, they felt, deserved better. Their seniors and juniors from that 2014 team deserved better.

A win this week at home against Duke would give them that chance. It would put Miami at 8-4 (5-3 ACC) and lock up a spot in one of the ACC’s Tier I bowls. Those games include the Pinstripe (New York City) and could include the TaxSlayer (Jacksonville), which is likely to pick an ACC team. The ACC could also get a Citrus (Orlando) bid, depending on whom the Orange Bowl chooses. Those are the most sensible destinations for Miami, which has a sizable fanbase in the New York-New Jersey metro area and, of course, would draw plenty of fans from Florida and the Southeast to an in-state game.

The other Tier I games — Belk (Charlotte) and Sun (El Paso) — don’t fit as well, since locals North Carolina, Wake Forest or Virginia Tech could be available for the Belk, and the Hurricanes played in El Paso last year.

Much depends on how the teams ahead of Miami fare. If Clemson wins the ACC and makes the playoff and Louisville drops to the Orange Bowl, Florida State or the ACC Coastal champion is likely to play in the Russell Athletic Bowl in Orlando. After those three games pick, the ACC’s Tier I bowls have their choice of ACC teams. An 8-4 Miami would be attractive, especially on a four-game winning streak, with an NFL Draft prospect at quarterback (Brad Kaaya) and a name-brand coach (Mark Richt).

A loss this week wouldn’t guarantee a Tier II slot, but a 7-5 Miami would need other teams to look bad, lest it go to Detroit, Shreveport or Annapolis.