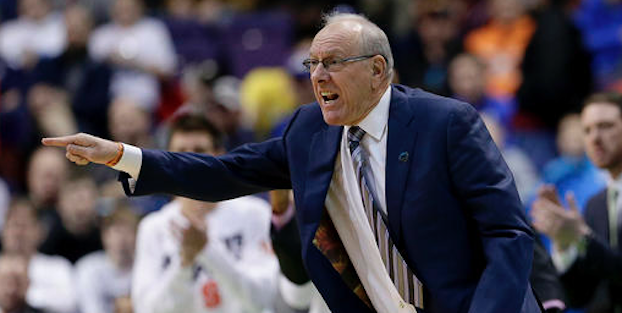 Jim Boeheim has Syracuse in the Sweet 16 for the fifth time in the last eight years. (AP Photo)

Not a lot of people thought Syracuse would be playing in a regional semifinal this week.

Many folks, in fact, didn’t see the Orange making the NCAA tournament at all after their exit in their opening game of the ACC Tournament against fellow bubble team and longtime rival Pittsburgh.

But here the Orange are, having advanced to the Sweet 16 for the fifth time in the last eight years, and facing a team that is actually seeded lower than them in Gonzaga in the Midwest Regional Semifinals.

In a year when the selection committee relied heavily on major conference programs, the Orange found their way into a No. 10 seed in the Midwest, even though the Orange finished the regular season and ACC Tournament with just a 19-13 record — firmly entrenching them on the bubble and forcing them to sweat out Selection Sunday.

But as it turned out, the committee not only gave Syracuse the benefit of the doubt coming off Boeheim’s nine-game suspension in December and January, but it also put the Orange in a very favorable position, where a scenario such as the one that played out last weekend was possible.