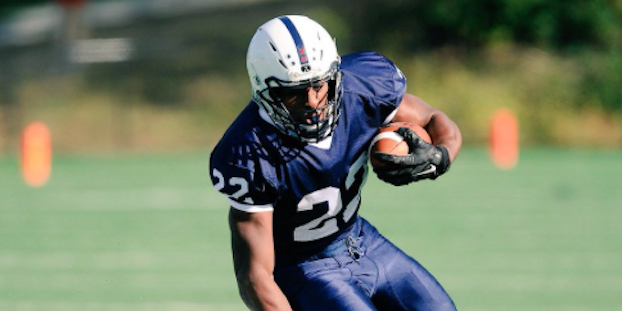 After a quiet fall on the recruiting front, Boston College experienced a surge this month, picking up four commitments in a one-week span. Those additions have Steve Addazio and his staff in position to put the finishing touches on their 2017 class.

The biggest, by far, of the quartet is A.J. Dillon, a consensus 4-star from Lawrence Academy in Groton, Mass. Dillon originally committed to Michigan in March but switched his loyalties to the in-state Eagles following an official visit to Chestnut Hill. Dillon’s pledge is a measure of revenge for Boston College against the Wolverines, who stole away prized defensive end commitment Kwity Paye in late October.

The 6-1, 230-pound Dillon is the first 4-star in the Rivals.com rankings to choose Boston College since 2014, when the Eagles signed running back Jonathan Hilliman, defensive end Harold Landry and linebacker Connor Strachan. Landry, Strachan and Hilliman would all go on to become major contributors for the Eagles.

Boston College, a run-focused offensive program for most of Steve Addazio’s tenure, ranked No. 13 in the ACC rushing yards per play (3.43) in the regular season. BC failed to have anyone rush for more than 500 yards individually.

In Dillon, Boston College is hoping to have its next Andre Williams. Williams came out of nowhere in 2013 — Addazio’s first season as BC’s head coach — to run for 2,177 yards, good for seventh all-time in NCAA history in a single season.

Like Williams, Dillon is a good-sized, hard-nosed rusher who can get the tough yardage between the tackles as an every-down back. But he’s also quick enough to bounce outside and make plays along the edge.

Gardner-Russaw, another running back/linebacker combination, is an under-the-radar project whom the Eagles are taking a chance on. Though he’s not ranked by any recruiting service, Gardner-Russaw is a raw talent who will have a chance to develop as the BC coaches try to figure out where they can best utilize his skills.

Muse, a consensus 3-star recruit and top-25 prospect in New Jersey, received offers from Rutgers, Temple, Purdue, Iowa, UConn and Maryland. The BC staff is projecting Muse as either a safety or wide receiver.

Todd, whom both BC and Michigan State made late moves for this fall, helps soften the blow of losing Paye to Michigan.