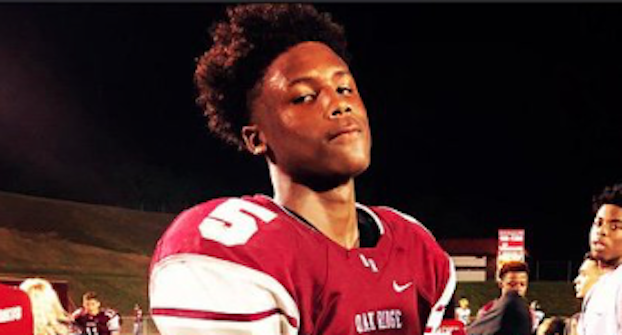 “Wide Receiver U” is a title that has fit Clemson throughout the Dabo Swinney era, and it doesn’t appear to be a nickname that’s going away anytime soon.

The program scored a monster Fourth of July pickup on Monday morning when consensus 5-star wideout Tee Higgins committed to the Tigers in a Bleacher Report video.

As the No. 15 overall player in the 2017 class, according to 247Sports’ Composite rankings, Higgins is the highest-rated player to pick Clemson this cycle. He’s also the second receiver in the rising senior class to give his verbal to Swinney, joining 4-star talent Amari Rodgers.

Higgins originally committed to Tennessee in August 2015 before reopening his recruitment in February.

The Tigers should be loaded at receiver for years to come. In February, they signed a trio of highly regarded wideouts in Cornell Powell, Diondre Overton and T.J. Chase. None of those players will have to be rushed into action prematurely this fall, as the top of the wide receiver unit includes All-ACC performer Artavis Scott, former 1,000-yard pass-catcher Mike Williams, promising sophomore Deon Cain and Hunter Renfrow, who caught two touchdown passes in last year’s national title game.

Clemson has 11 players committed to its 2017 class, which is ranked in the top 15 nationally by most major services.