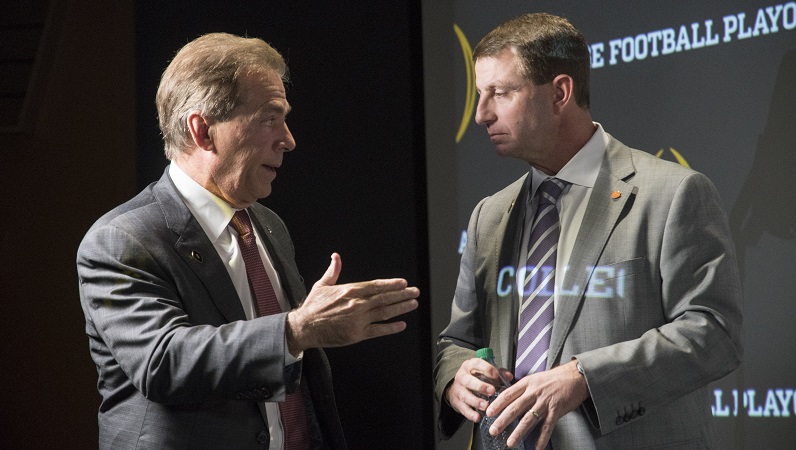 After winning the ACC championship for a third straight autumn, Clemson gets its just reward – another shot at the national championship.

The Tigers get a third straight draw with Alabama in January’s College Football Playoff. But this time around, the Tigers and Crimson Tide meet in the national semifinal. What will it take for the Tigers to come away from New Orleans with a second straight win over Nick Saban’s club? We take a look at three keys to victory for the Tigers.

WIN ON THIRD AND FOURTH DOWN

Clemson is one of the nation’s best defenses on third down, holding its opponents to just a 27.8 percent conversion rate. The Tigers need that trend to continue against Alabama. The Crimson Tide offense struggled on third down, converting just 41.5 percent to rank 55th nationally. Alabama wasn’t used to a lot of third down situations – only 147 in 12 games. But if the trends from the regular season continue in this game, Clemson would appear to hold a significant defensive advantage over Alabama’s offense on third down.

A critical moment will come up in this game in which either the Tide or Tigers are tempted to go for it on a fourth and short-yardage situation. The winner of these crucial battles will hold the edge.

FIND A WAY ON THE GROUND

Although the Tigers don’t have the one-man wrecking ball of Wayne Gallman this year, the reality is that the Crimson Tide had their way with the former Clemson star. Gallman averaged just 2.8 yards per carry in Clemson’s two previous CFP matchups with Alabama. For Clemson to win this time around, they must take some of the pressure off quarterback Kelly Bryant with a consistent running game.

Clemson’s three-headed rushing attack of Bryant, Tavien Feaster, and Travis Etienne has combined for more than 1,750 rushing yards this season. Clemson will need to come much closer to their seasonal 5.4 yards per carry on the ground than Gallman’s 2.8 average in order to advance to the national championship game. It won’t be easy, with Alabama ranking third nationally in averaging just 92 rushing yards per contest. But if the Tigers can successfully run the football, they can control field position and time of possession.

Clemson was able to take in the initiative in the second half of last year’s national championship showdown with Alabama by slowing down Jalen Hurts. If the Tigers are to prevail for a second straight year over the Crimson Tide, they once again must stifle Alabama’s quarterback.

It’s not that Hurts is a dynamic passer; he failed to throw for more than 250 yards in a single game all season. It’s how efficient Hurts can be when given protection and plenty of room to run. He only threw one interception all season. He rushed for at least 40 yards in 10 of Alabama’s 12 games. He was only sacked 21 times over those 12 outings.

For Clemson, it’s not necessarily about sacks. Auburn only sacked Hurts twice. But what Auburn did was consistently disrupt Hurts in the pocket. The Tigers finished the Iron Bowl with nine quarterback hurries, as they constantly kept Hurts flustered and out of his rhythm. If Clemson can follow suit, and keep the Alabama quarterback off-balance on early downs, the Tigers will force more of those third downs that they’ve been so effective all season in defending.

Read more: McGee of CFP: “Clemson is obviously way better than we thought they’d be this year”