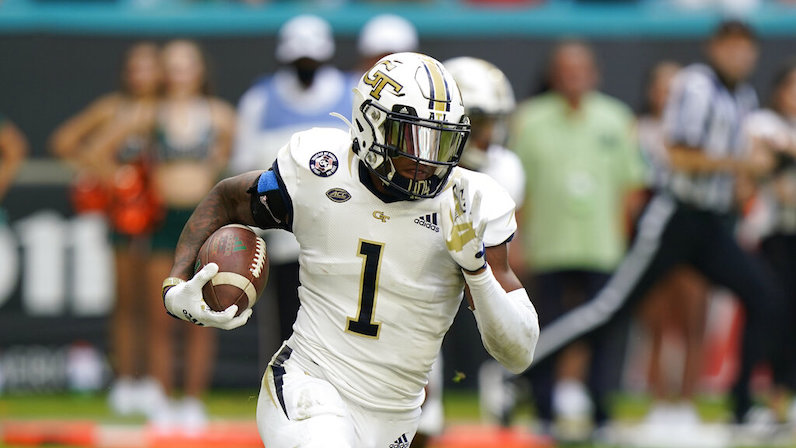 Georgia Tech running back Jahmyr Gibbs runs the ball during the second half of an NCAA college football game against Miami, Saturday, Nov. 6, 2021, in Miami Gardens, Fla. (AP Photo/Wilfredo Lee)

One of the top skill position players in the ACC is on the move. Georgia Tech running back Jahmyr Gibbs announced on Twitter that he’s decided to enter the NCAA transfer portal.

Gibbs was a massive get for Geoff Collins in the 2020 recruiting class. Early on in his freshman season, Gibbs showcased his elite talent set; as a rookie, Gibbs compiled 763 yards from scrimmage (6.8 yards per touch) and seven touchdowns.

During his sophomore season, Gibbs carried Georgia Tech, at times. Gibbs led the ACC with an average of 150.4 all-purpose yards per game. In the 2021 season, Gibbs scored a touchdown in three different ways: rushing, receiving and on a kickoff return.

This is bad news for Collins, who finishes his third season with Georgia Tech with a 3-9 record. Collins is just 9-25 at Georgia Tech, since taking over from Paul Johnson.

Gibbs will be one of the top players in the transfer portal this offseason. Every team in the country should be interested in adding Gibbs.

Yellow Jackets land again at No. 13 in this week’s Power Rankings