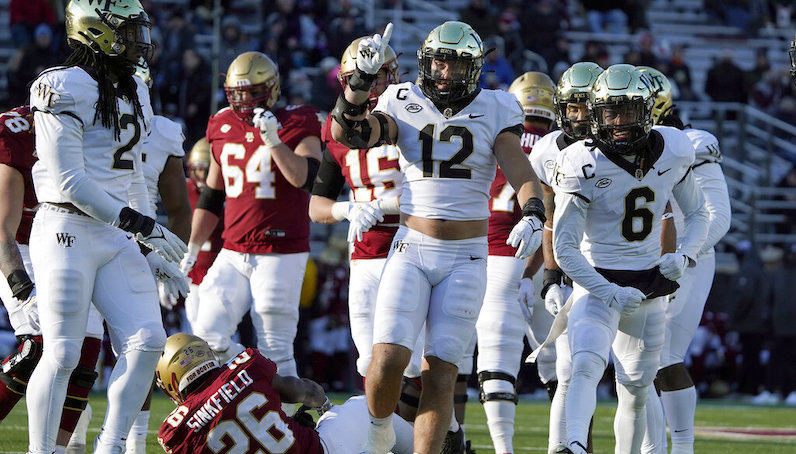 Here are the final ACC Power Rankings of the 2021 season — topped by the two teams headed to league’s title match.

Wake Forest put together a statement win on the road vs. Boston College: 41-10, with Sam Hartman accounting for four total touchdowns. In doing so, Wake Forest clinched the Atlantic Division.

The only QB in ACC history with 4,000+ pass yards and 40 TD in the regular season 🔥🔥@kennypickett10 @Pitt_FB pic.twitter.com/O4c6nUIjgC

It looked like the lights were about to go out on NC State — and then lightning struck. NC State’s improbable come-from-behind victory over North Carolina was one for the ages.

This is a truly incredible statistic, too.

NC State trailed by 9 with 2:12 left to play in the 4th quarter vs North Carolina before coming back to win.

They are the 1st team to win a game this season when trailing by 9 with less than 2:30 to play.

Teams had been 0-451 in that scenario this season prior to their win. pic.twitter.com/NLCX8cYNa5

It’s hard to believe, I know: the team with all over the really talented players is good at winning football games.

The final game of the David Cutcliffe era at Duke was just another day at the office for Tyler Van Dyke. The freshman quarterback threw for 381 yards and three touchdowns as the Canes stomped the Blue Devils, 41-10.

Louisville’s run defense was shredded by Kentucky, and the Cards flopped in Saturday’s rivalry matchup: 52-21.

What looked like a soon-to-be defiant road win for Sam Howell over NC State went south — quickly. As unlikely as that final result was, it’s really a fitting coda for North Carolina’s 2021 regular season.

Now, it remains to be seen what Howell will do next.

The Hokies, for the most part, held Brennan Armstrong in check, which is a big problem for the Cavaliers. Virginia was outscored by Virginia Tech 5-0 in the fourth quarter and lost 29-24.

It wasn’t pretty, but Virginia Tech won a wild rivalry matchup with Virginia over the weekend. The victory was VT’s first since Justin Fuente left. Virginia Tech is now bowl eligible, too.

Florida State’s comeback effort fell just short vs. Florida. For Mike Norvell and FSU, there will be a lot of eggs in the 2022 basket.

Buoyed on with support from Wolfpack Nation, Boston College was still unable to prevail at home vs. Wake Forest. Hartman and the offense were simply too much.

After moving to 5-4 with a win over Boston College back on Oct. 30, Syracuse lost three straight games and fell just short of qualifying for a bowl game.

Dino Babers could be in some trouble at Syracuse, as evidenced by multiple staffing changes following the season.

There’s no doubting some of the accomplishments David Cutcliffe achieved at Duke. Unfortunately, the writing had been on the wall for some time now. As the two parties mutually part ways, Nina King must now look for the next head coach in Durham, which is never an easy process.