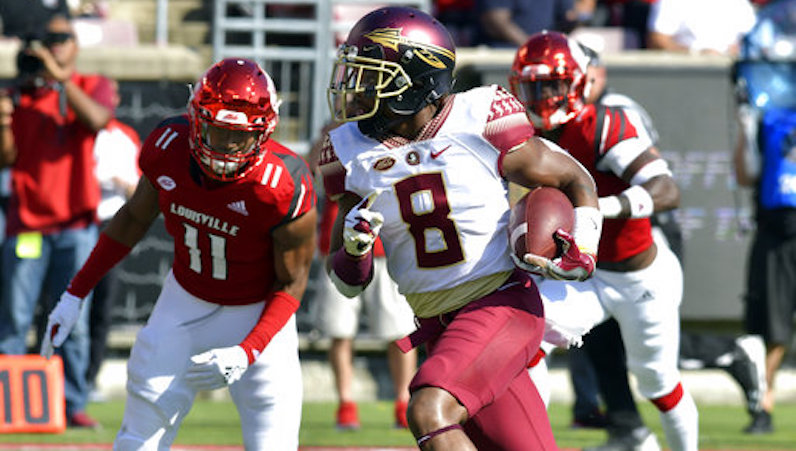 Florida State will be down a couple bodies for the first half of Saturday’s all-important road contest at NC State.

Sitting out the first half of the contest with the Wolfpack will be receiver Nyqwan Murray and linebacker Zaquandre White. Both were suspended for throwing punches in Saturday’s 59-10 loss to Clemson.

The subtraction of the senior Murray will yield the biggest opportunity for others on the depth chart. Murray currently leads the Seminoles with 40 catches for 536 yards and has three touchdowns, including the game-winner to beat Louisville. Murray was also FSU’s leading receiver last year, but despite his numbers, there’s hardly the sense that he is replaceable.

Although his career has been a productive one, Murray comes with some baggage – like the punch thrown last week against Clemson. Murray has been the go-to guy this season for quarterback Deondre Francois, but there’s also a real chance that Francois isn’t the starter for Saturday’s contest in Raleigh.

Depth at wide receiver was a concern coming into the season and still is to some extent, but FSU has witnessed the maturation of players like Keith Gavin and DJ Matthews this season. Tamorrion Terry, a redshirt freshman, has perhaps taken the biggest strides with team-highs of 20.2 yards per catch and five touchdown grabs.

In recent weeks, the Seminoles have seen increased contributions from a couple of youngsters. Tre’Shaun Harrison, a shifty speedster out of Seattle, has become part of the rotation and caught his first career touchdown two weeks ago against Wake Forest. Last week, it was another speedster, Keyshawn Helton — the nephew of FSU linebacker great Derrick Brooks — who scored his first career touchdown.

Helton led FSU in yards from scrimmage with 100 receiving on three catches and the only touchdown for the Seminoles in the embarrassing loss to Clemson. It should be noted that the touchdown reception came from Blackman on a 73-yard scoring play.

Zaquandre White was once a blue-chip running back for Florida State who moved to linebacker prior to the season to help with depth issues. White had only recently worked himself into the rotation and is just two weeks removed from a seven-tackle performance against Wake Forest.

White has just 12 tackles on the season but being unable to go for the first half against the Wolfpack is not insignificant. Junior Dontavious Jackson and redshirt freshman DeCalon Brooks – the top two tacklers from the position – were both seen in non-contact jerseys this week in practice. The same was true for junior Josh Brown.

Jackson left last week’s contest against Clemson with an apparent injury but seems primed to go this weekend against NC State. Brooks is also expected to play, but if either of those two players are not themselves early, the only other linebackers on the roster that currently have double-digit tackles are Leonard Warner and Adonis Thomas.

Ahead of Time: How Tee Higgins leads Clemson into the future and beyond