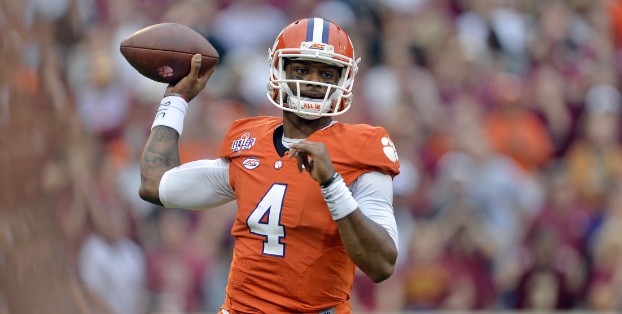 Deshaun Watson is normally accurate, but he's had his troubles against Louisville. (AP Photo).

While doing some research earlier Friday for a post on Louisville’s star defensive back Jaire Alexander, I stumbled into the fact that the Cardinals have intercepted Clemson’s Deshaun Watson more than any other team — and it’s not even all that close. I thought it’d be interesting to go through and list out which teams have given the hyper-accurate Watson the most fits, in terms of interceptions.

Here’s a quick breakdown of which teams Watson, who has just 23 career interceptions (886 career pass attempts), have picked off the signal-caller the most.

Over the last three seasons, Louisville has intercepted Watson more than almost every other opponent combined. The Cardinals account for nine of those 23 picks. Only five other teams, including four from the ACC, have intercepted the star QB more than one time: Georgia Tech, Boston College, Wake Forest, North Carolina and Troy.

Only one of Watson’s interceptions took place in a loss. That of course is last season’s defeat to Alabama in the national title game, when the ballhawking Eddie Jackson snagged Watson’s pass, which was intended for Ray-Ray McCloud.

Watson has thrown 17 of his career interceptions against ACC opponents; only four teams account for those turnovers, too. NC State and Syracuse have one interception each against Watson. The Wolfpack’s lone pick in three games the Heisman candidate occurred last Saturday, when Mike Stevens intercepted a ball, and took it back 28 yards for a score — the first pick-six of Watson’s storied career.