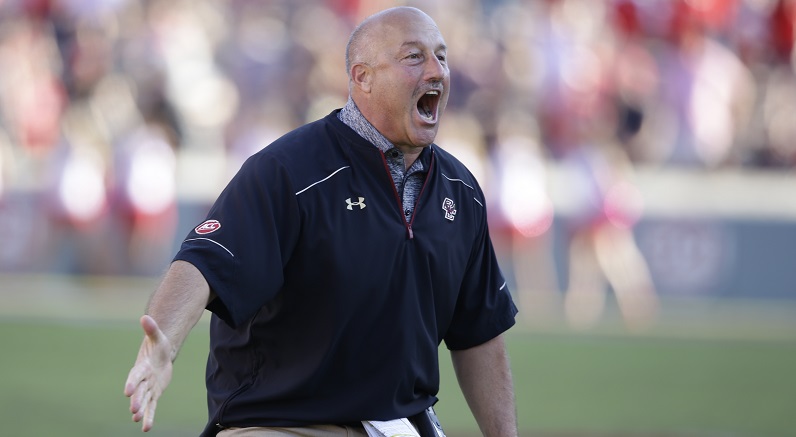 Boston College head coach Steve Addazio celebrates following a touchdown against North Carolina State during the second half of an NCAA college football game in Raleigh, N.C. After going nearly two calendar years without a conference victory, coach Steve Addazio avoided the hook by winning his last two games of the regular season and qualifying for a bowl game. (AP Photo/Gerry Broome, File)

Hot temperatures returned to Alumni Stadium on Wednesday as the Boston College football held its ninth preseason practice on campus.

To try and simulate game-like conditions, officials worked the practice and flagged the Eagles for any penalties. The practice was an upbeat and up tempo two-and-a-half hours in the early August sun, with the offense and defense working on their own side of the ball before multiple game-situation drives.

One of the highlights of the day was a diving catch downfield by redshirt freshman wide receiver Christian McStravick for 35 yards. Redshirt freshman quarterback Anthony Brown led him perfectly with his throw to the 19-yard line and McStravick made a spectacular catch.

On the next play, junior running back Richard Wilson scampered for a 19-yard touchdown run.

Not to be outdone, graduate student quarterback Darius Wade led the offense down the field on the next drive. Sophomore running back Davon Jones capped that drive with a 19-yard touchdown run of his own.