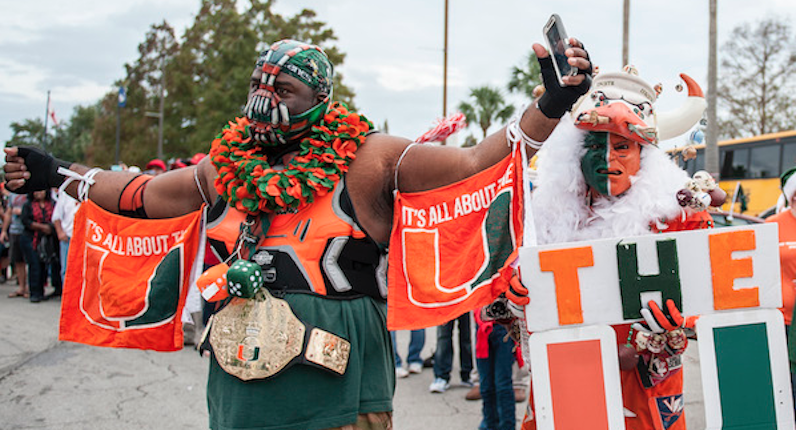 Any program hopes to get top recruits to visit their campus, because anything can change in a player’s recruitment once he steps on campus. That’s when his thoughts of what a college might be like becomes a real feeling, a true experience of what a program has to offer.

And kids make their college decisions based on that kind of concrete evidence.

So Miami getting a visit from four-star linebacker Amari Gainer means it is more than just another program, in Gainer’s eyes. But no one should expect Gainer to flip to the Hurricanes.

Gainer, rated by 247Sports as the second-best outside linebacker in the state of Florida for the 2018 cycle, told 247Sports he plans to visit UM with his high school team at some point in July.

The obstacle for Miami, which would like to add at least a few linebackers in this class to overcome the possible post-2018 losses of sophomore starters Shaq Quarterman, Michael Pinckney and Zach McCloud, is this: Gainer is locked in with Florida State.

Not only are the Seminoles is hometown school — he attends Lawton Chiles High, which is located about a dozen miles north of Doak Campbell Stadium — it’s the program his father, Herb, played wide receiver for from 1983-87.

Herb Gainer caught 71 passes for 1,155 yards and 11 touchdowns as a Seminole, and went 1-3 against Jimmy Johnson’s Hurricanes during his career. He graduated more than a decade before Amari was born, but his son no doubt grew up hating the Canes as much as he loved the Noles.

College decisions are about business, as well, and Gainer sees himself as a fit in Tallahassee – as much as Hurricanes defensive coordinator and linebackers coach Manny Diaz and UM’s top-rated group of commits is trying to flip him.
“Lorenzo [Lingard] has been telling me that the coaches treat you like family and that they will look out for you,” Gainer told 247Sports. “He tells me they are bringing some great players in with this class and that Miami is on the way up.”

That may be true, but FSU is ahead, and Gainer won’t feel the family connection at any other place as strongly as he does at Doak.

That’s one reason he talks about “when” he gets to FSU, not “if” he gets there. If you’re a Miami fan hoping for a flip, it’s probably best to look elsewhere.