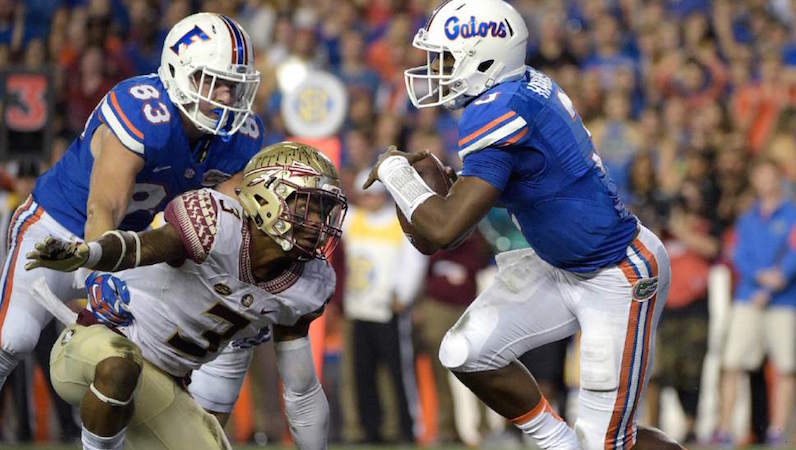 Florida State will return nine starters from a defense that ranked in the top 25 nationally, but the most indispensable piece was one that wasn’t there for the vast majority of last season.

Derwin James returns to the FSU lineup after appearing in just two games last season for the Seminoles. After recording an interception in the season-opening win at Ole Miss, James was injured in the second half of the Seminoles’ home opener against Charleston Southern.

James suffered a meniscus tear that was supposed to sideline him for 5-7 weeks; however, James never returned. Although it took time to adjust to life without its stud safety, things did improve as the year went along. For the first month of the 2016 season, the FSU defense ranked outside the top 100 nationally. By the end of the year, though, it was a top 25 defense. Adding James to that mix makes things ultra-scary for opponents.

During the FSU spring game on April 8, James showed that he has not lost a step. In a 17-7 loss for the Garnet team, James was all over the field, recording a game-high seven tackles, which included three for loss and two sacks.

A recent story from 247Sports’ Christian Corona suggested that the Seminoles are two touchdowns better when James is on the field. Pro Football Focus recently questioned whether James was the best defensive player in the country.

While that may seem like high praise for a third-year player who missed 11 games a season ago, it is justified. With the exception of maybe defensive tackle, James can play just about every position on defense. James knows where to be against the pass; he sniffs out the run on zone-reads and misdirection. James can even lay out 300-pound offensive tackles as a blitzer. Entering 2017, he will have 15 games and three full springs under his belt.

Despite being worked along slowly early as a freshman in 2015, James ranked in the top three for Florida State in almost every major statistical defensive category, including tackles, tackles for loss, sacks and forced fumbles.

Big things are on the horizon

As has become the case almost every year for Florida State, expectations entering the year will be immense. The Seminoles finished last season with an Orange Bowl victory and ranked in the top 10 nationally, but there is reasonable speculation that it could have been even better with a healthy James.

FSU lost games to North Carolina and Clemson by a combined four points, and had a lead in both games in the final two minutes. Both of those performances occurred against quarterback that were selected in the first round of the NFL Draft — Mitch Trubisky and Deshaun Watson.

One stop in each game could have potentially landed FSU in the College Football Playoff. With a healthy Derwin James, that’s a real possibility in 2017.