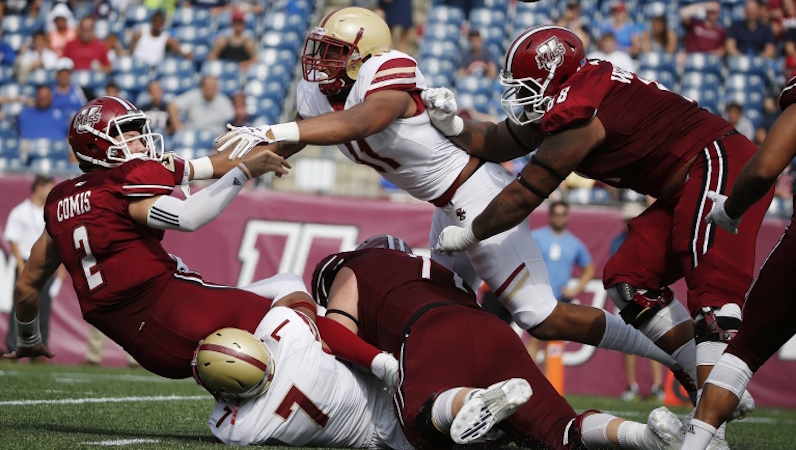 Massachusetts quarterback Ross Comis (2) gets rid of the ball as he is tackled behind the line of scrimmage by Boston College defensive end Harold Landry (7) during the fourth quarter of an NCAA college football game in Foxborough, Mass., Saturday, Sept.10, 2016. Boston College won 26-7. (AP Photo/Michael Dwyer)

Boston College’s Harold Landry grew into one of the nation’s top pass-rushers in 2016, leading the country with 16.5 sacks and seven forced fumbles. With Landry’s return to Chestnut Hill for the 2017 season, the Eagles have the makings of the best returning defense in the ACC.

Landry could have declared for this spring’s NFL Draft following his breakthrough junior season. While he wasn’t projected as a first-rounder, there’s no question he would have gotten selected. But Landry, seeing an opportunity to raise his stock, decided to return for his senior season.

Landry’s return is crucial for a BC defensive line that is losing Kevin Kavalec at defensive end and Truman Gutapfel at defensive tackle. The Spring Lake, N.C., product will likely get some votes for preseason ACC Defensive Player of the Year.

This past fall, the Eagles ranked second in the ACC, behind only national champion Clemson, in total defense, allowing 314.2 yards per game. BC returned to the postseason and got the program’s first bowl win since 2007, beating Maryland in Detroit’s Quick Lane Bowl.

With the return of Landry and six other defensive starters, Boston College is in position to continue making strides in one of the toughest divisions in college football. As he did this past season, defensive coordinator Jim Reid will be able to scheme around the versatile senior.

With his ability to support the run as well as get after opposing quarterbacks, Landry can be used in a variety of ways. He can play away from the line, dropping back into pass coverage, or he can put his hand on the ground and play up front. While Landry has mostly played defensive end during his time at Boston College, CBS Sports projects him as the No. 6 outside linebacker prospect in the 2018 NFL Draft. (Some of the prospects listed ahead of him have already declared for the 2017 draft.)

The Eagles showed progress in 2016. The next step will be beating Atlantic Division powers in Clemson, Florida State or Louisville, and getting back into contention near the top of the standings.

Landry, the team’s best defensive player, will aid greatly in that effort.