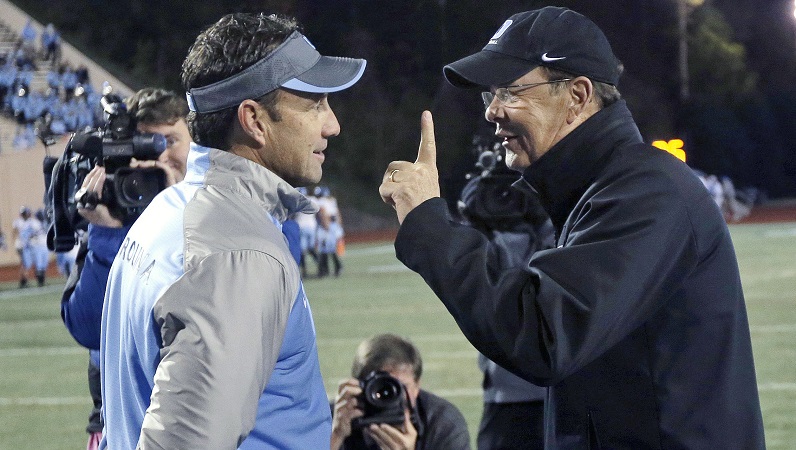 No, the calendar has not skipped ahead to November all of the sudden.

Duke and North Carolina will play football Saturday at Chapel Hill even though we’re only officially one day into fall.

“Well it sure is warm for November,” Duke coach David Cutcliffe joked. “It must be November if we’re playing North Carolina. It is unusual for players on both teams to have a game of this much intensity and a big rivalry (in September).”

This will be the earliest in a season the fierce rivals have ever met on the football field. They’ve played in October as recently as 2012. But this will be their first September meeting.

For 3-0 Duke, two other factors are just as big as the fact that it is playing UNC. This is the first ACC game for the Blue Devils and their first game away from Wallace Wade Stadium.

For a young team playing confidently so far, its performance on this stage will go a long way toward determining how the rest of the season will play out.

Duke practiced this week with noise blaring from speakers. The sound of the rhythmic “Tar! Heels!” chant could be clearly heard as Duke prepared for a hostile environment.

Other aspects of the trip are unique in a positive manner for Duke. It’s a road game that doesn’t involve getting on an airplane. The team will spend the night before at the same hotel is uses for home games. Heck, the players’ parents are having a pre-game tailgate party in Durham before driving over to Kenan Stadium.

After decades of being on the wrong side of a lopsided rivalry, Duke finds itself on solid footing this decade. Duke and UNC have split their last six games, with the Blue Devils winning 28-27 in Durham last November.

That was a significant highlight in a sour season that ended at 4-8 with Duke missing a bowl game for the first time since 2011.

Now, the Blue Devils are the hotter team in the rivalry. They appear headed back to a bowl again this season.

For Cutcliffe, leading his team into such an emotional game early is reminiscent of his days coaching at Tennessee. September games with Florida routinely carried SEC East and, often, national implications.
Cutcliffe wants his Blue Devils to play well at UNC. But it’s equally as important they get past whatever happens Saturday to focus on the rest of the season.

“It’s a very difficult thing when you don’t win early in that setting,” Cutcliffe said. “Sometimes it was more difficult when you won that game. What we have to do is focus on how well we play more so than the result because it’s still going to be about getting better as a football team when you have eight games remaining after this one.”