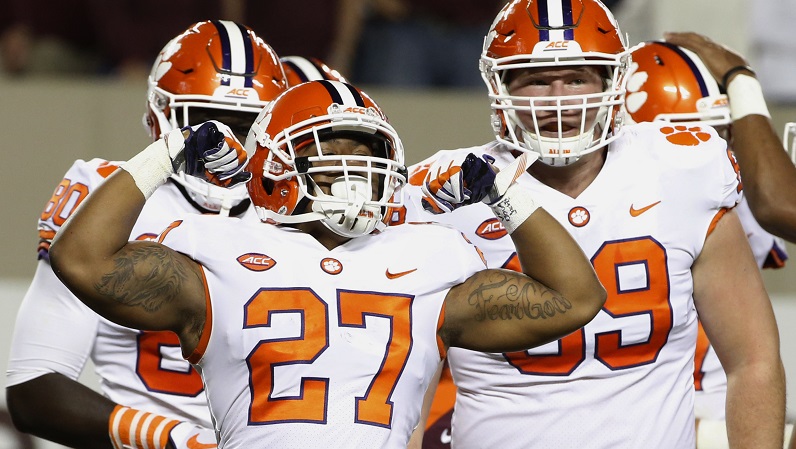 Clemson running back C.J. Fuller (27) celebrates a touchdown during the first half of an NCAA college football game against Virginia Tech in Blacksburg, Va., Saturday, Sept. 30, 2017. (AP Photo/Steve Helber)

Clemson has steamrolled its way through the first half of the regular season, poised for a third straight berth in the ACC Championship Game. The Tigers have already cleared some legitimate obstacles, beating the likes of Auburn, Louisville, and Virginia Tech in the month of September.

Taking a look at the remainder of Clemson’s slate, two games stick out. Both are in November, as the Tigers travel to NC State Nov. 4 before hosting Florida State in Death Valley on Nov. 11.

FSU’s quarterback situation reduces its chances of pulling an upset over the Tigers – not to mention the fact that they have to travel to Clemson. This makes Clemson’s trip to Raleigh on Nov. 4 the most important – and potentially most difficult – obstacle in Clemson’s path to another College Football Playoff berth.

With NC State’s Thursday night triumph over Louisville, the Wolfpack and Tigers are the only two 3-0 teams left in the ACC. Georgia Tech was the only other ACC team without a loss at that point in the season. NCSU’s triumph over Louisville was the program’s home victory in Raleigh since 1992 in which both teams entered the game ranked.

NCSU hasn’t won the Textile Bowl over Clemson since 2011. Mike Glennon was quarterbacking the Wolfpack then. Dabo Swinney was getting his footing with the Tigers, awkwardly at times. The term “Clemsoning” was becoming a household name around the ACC.

Much has changed since 2011, as Clemson has emerged into a national powerhouse once again. Meanwhile, NC State has been fighting for footing in one of America’s toughest conference divisions. But with its victories over Florida State and Louisville, NC State has emerged as this season’s top contender to Clemson in the ACC Atlantic.

NC State has one of the more prolific pass offenses in the ACC, outdoing Clemson thus far in averaging over 300 passing yards per game. NCSU is also in the top five in the ACC in points per game, sacks, first downs per game, and average yards per kick return.

Wolfpack fans have been trying for a year to forget last season’s loss in Death Valley, when NCSU had a chance to ruin Clemson’s NCAA title hopes. But at the same time, the Wolfpack can look to last year’s near-miss to muster hope for this year’s return encounter with the Tigers.

It was a recipe for a legendary upset. The Wolfpack forced four Clemson turnovers and produced nearly 400 yards of total offense. They won time of possession. They had a 33-yard field goal attempt from Kyle Bambard that could have won the game in the final seconds.

Although that afternoon didn’t go NC State’s way, it proved that a Dave Doeren-led club could hang with a national championship contender for 60 minutes. And for those returning Wolfpack players, they’ve had a whole year to stew over that devastating loss.

This time around, NCSU will have the support of a full house at Carter-Finley Stadium. If the Thursday night game against Louisville was any indication, the Wolfpack will have a loud, rowdy crowd behind them. If they can once again find a way to force turnovers and move the football, they can make it very interesting against the Tigers.