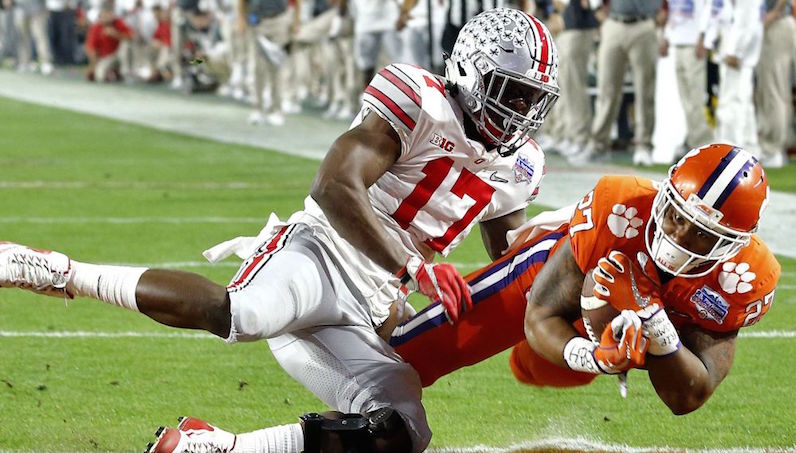 With training camp rapidly approaching, Clemson has the good fortune of having three experienced, capable running backs in its backfield. Though the Tigers lost Wayne Gallman, the Tigers head into 2017 with juniors C.J. Fuller and Adam Choice, as well as sophomore Tavien Feaster.

Fuller heads into August as the projected starter, having emerged as Gallman’s top backup during last season’s national championship run. In Fuller, the Tigers are getting a reliable veteran with the skill to make up for Gallman’s lost production.

Averaging 4.5 yards per carry last season, Fuller produced 211 rushing yards. Though he failed to score a rushing touchdown, Fuller scored twice on receptions out of the backfield. With Gallman casting a large shadow over the Tiger offense, he wasn’t in a position to be utilized in a way to fully showcase his talents.

Choice, not quite back at full strength last fall, did see action, rushing for 158 yards on 45 carries (3.5 ypc). But this spring, Choice looked more like the player he was as a true freshman, before his devastating knee injury in the fall of 2014.

Feaster actually finished third on the Tigers last season, behind only Gallman and Deshaun Watson, with 221 rushing yards on just 37 carries.

Feaster averaged six yards per carry as a freshman due largely to a 45-yard scoring run at Boston College. But he also had carries of at least 11 yards in four other contests, including the College Football Playoff semifinal victory over Ohio State.

Dabo Swinney must know how lucky he is to have a player like Feaster, arguably the nation’s top running back as a high school prospect, as a backup. With his big-play ability, however, it could prove more and more difficult as the season wears on to keep Feaster off the field.

While Swinney knows what he’s getting with Fuller and Feaster, the real wild card in the equation is Choice. He seems fully healed from a nearly two-year rehabilitation process. The essential key now is getting heavy game repetitions, and regaining the confidence that he can carry the load on Saturday.

Fuller can’t afford to let up one tiny bit. With Choice and Feaster both eager to take the field, any letdown in August could cost Fuller the top spot. But when the Tigers open camp, it will be Fuller in the lineup with the starters.