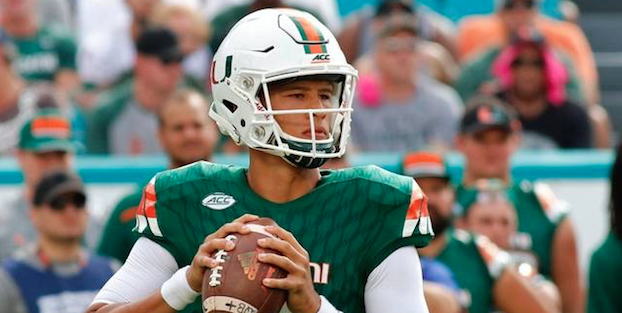 There are a few reasons Brad Kaaya decided to leave school.

Those are six of the quarterbacks in a loaded 2018-eligible draft class, and Kaaya could find himself in the middle of that group, or at the back of it, with an average senior season. Given his college résumé, specifically his status as Miami’s all-time leader in yards, completions and attempts, and a light crop of quarterbacks in the 2017 class, Kaaya elected to turn pro.

Could Kaaya be a first-round name in a cast that includes Mitch Trubisky, Deshaun Watson and Deshone Kizer? That’s doubtful, but it’s possible.

Kaaya has the measurable assets — his 6-4, 215-pound frame and a stronger-than-average, very accurate arm — that pro teams covet. He is a prototypical drop-back passer in a league that likes them. But Trubisky and Watson are getting the most love from scouts and analysts.

Kaaya won the “most accurate passer” award at a skills competition held the week of the Super Bowl, and he could display his passing touch at the NFL combine next week, but the speed and agility drills are not likely to be his friend. That will reinforce the stories about Kaaya’s lack of mobility, a major drawback for any team drafting him.

Pat Mahomes and Kizer, a week before the NFL combine, are rated higher than Kaaya, a third- to fourth-round pick. NFL.com analyst Daniel Jeremiah rates him as a sixth-rounder. That seems drastically low.

To see where Kaaya might go, let’s discuss who is in need of a quarterback.

The Browns are always in need, it seems. Free agent Jay Cutler is not likely to stick around with the Bears, and Brian Hoyer could help Kaaya get settled. San Francisco could give Kaaya the chance to return to his home state, California, if it moves on from Colin Kaepernick.

It’s possible Houston would draft Kaaya to compete with Brock Osweiler and Tom Savage. Arizona could see him as a better option than Drew Stanton, with Carson Palmer nearning the end of the line. The Bills have been linked to Deshaun Watson, but Kaaya could compete with E.J. Manuel, Tyrod Taylor or Cardale Jones.

If the Browns elect to draft a non-quarterback, like Texas A&M edge-rusher Myles Garrett, and no trades are made, the 49ers or Bears might take Trubisky or Watson with the second and third picks. In that scenario, the Jets (No. 6), Bills (No. 10), Cardinals (No. 13) and Texans (No. 25) would still be in need of a quarterback. Kaaya’s main competition is Mahomes and Kizer, and with so many talented players available in the first round — like Kaaya’s former Miami teammate, tight end David Njoku — it’s fairly clear Kaaya would slip to the second round. The Browns, 49ers and Bears pick with the 33rd, 34th and 35th selections.