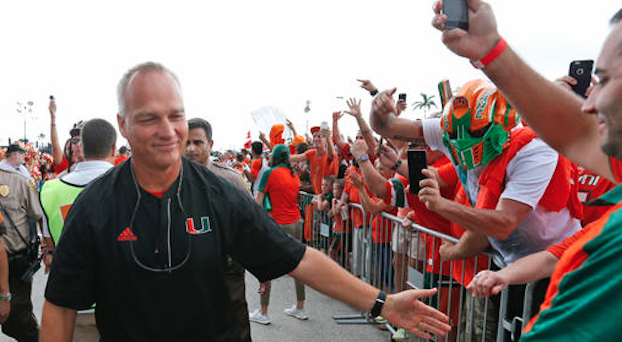 Mark Richt and his staff are on the way to signing the nation's top recruiting class in 2018. (AP Photo)

Few diehard Miami fans, even those with the most orange-tinted glasses, believed their team was as good as its early-season dominance made it seem.

Those blowouts were a product of playing weak opponents. Florida A&M and Florida Atlantic were miserable this year, and playing Appalachian State and Georgia Tech was challenging mostly because they were Miami’s first two road games of the year. UM dominated in those games and thus earned itself a pretty little No. 10 ranking.

Flash forward to the last four games. Miami went 4-0 and trounced a team that beat Clemson and Penn State — we’re talking about Pitt — and scored two comfortable road wins (Virginia, NC State) before an easy Senior Day win over Duke. The difference: Those games were against ACC opponents, and Miami looked a little bit like its old self against better competition.

Though it’s hard to feel good placing faith in a team that lost four in a row in October, the Hurricanes do appear to have turned the corner. But we won’t truly know until they’re standing victorious after playing 10-2 West Virginia, the third-best team in the Big 12 and the No. 16 team in the College Football Playoff ranking.

Miami has played solid ball over the last month. Mark Richt has figured out what to do with Brad Kaaya, which is to say let him throw quickly, get into a rhythm and take shots deep. Richt says that, in his offense, the quarterback throws to the open man, so he isn’t making the call to throw to David Njoku more. However it’s happening, it’s helping — Njoku has become a force. Miami is also running the ball better, with backup Gus Edwards healed from the foot injury that cost him last year. He’s passed Joe Yearby as the No. 2 behind 1,000-yard rusher Mark Walton. All that’s helping the play-action game, and all of that is possible because Miami’s retooled offensive line has done its job.

We talk about the offense so much here because the defense has been steady-to-good all season long. Its only bad game was against Virginia Tech, and that 37-point performance happened because Miami missed three starters to injury, played as many as six true freshmen in key moments and was on its third game in a 12-day span. They were gassed, frankly.