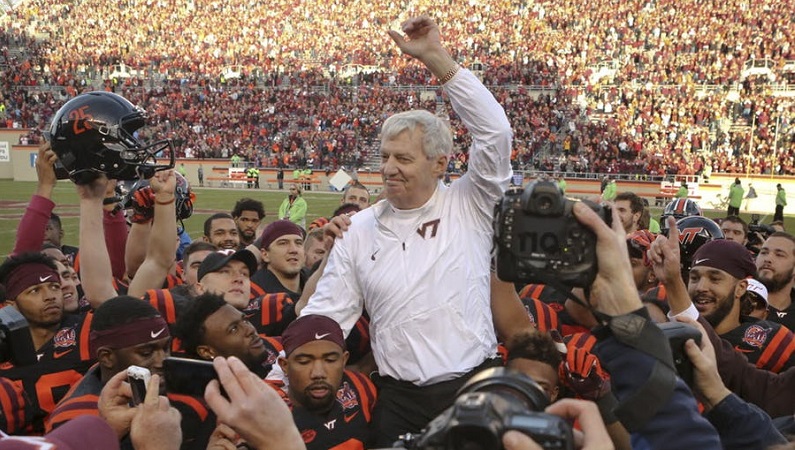 Frank Beamer and Don Nehlen – two of the most decorated and accomplished coaches in college football history – will serve as honorary captains for their respective schools as Virginia Tech and West Virginia renew their rivalry at FedExField on Sept. 3. Beamer and Nehlen are anticipated to participate in the pregame coin toss, with the winning school’s honorary captain being involved in the presentation of The Black Diamond Trophy immediately following the game.

While this pair of former BIG EAST rivals frequently clashed in contests with national reprecussions, Beamer and Nehlen remained friends off the field and are still regarded as two great ambassadors for college football.

“Don Nehlen remains one of my all-time favorite people,” Beamer said. “Every time we played West Virginia it was a big game for our team and our fans. Going into Morgantown was always a challenge. You knew you were going to have to face a tough, well-coached football team for 60 minutes and that crowd wasn’t going to let up on you, either. I’m so honored that I’ll get to join Coach Nehlen on the field as our two teams meet again.

“I’m just relieved that I’m not going to need a ticket to get into the game,” Beamer chuckled. “I’m looking forward to seeing our two teams play again. It should be a great evening for football as the Hokies and Mountaineers meet.”

Beamer was the winningest active coach in FBS history at the time of his retirement in 2015, having tallied an impressive career record of 238-121-2 at Virginia Tech. Under Beamer, Virginia Tech football enjoyed unprecedented success, with 23 consecutive bowl appearances, a mark that the Hokies extended to 24 straight under head coach Justin Fuente in 2016.

“I have all the respect in the world for Frank Beamer,” Nehlen said. “Not only is he is class man and a great friend, he did an unbelievable job at Virginia Tech and took that program to its greatest period of success. When the Mountaineers and Hokies got together to play, it didn’t matter whether either team was 10-0 or 0-10, it defined what a great rivalry was.

“Both teams played hard, physical and never quit the entire game,” Nehlen added. “After I retired, Frank was still coaching, and I always followed the Hokies because of him. I am excited to not only see Frank on Sept. 3 but to see the rivalry renewed and to see both teams play another great game. I am honored to be an honorary captain with Frank and represent West Virginia University.”

Appointed to the College Football Playoff selection committee in 2017, Beamer received the Neyland Trophy for his contributions to the game as well this year. He is also on the 2018 ballot for the College Football Hall of Fame. He continues to serve Virginia Tech as an ambassador for athletics and the spokesperson for the Drive for 25 campaign that seeks to increase membership in the Virginia Tech Athletic Fund (aka the “Hokie Club”) to 25,000 members.

Including a six-year stint at Murray State, Beamer owns a 280-143-4 career record as a head coach, giving him more victories than the illustrious likes of Tom Osborne, Lou Holtz, Bo Schembechler, Steve Spurrier and Woody Hayes. A three-time BIG EAST Coach of the Year (1995, 1996, 1999), Beamer was named ACC Coach of the Year in 2004 and 2005. He was the consensus National Coach of the Year in 1999.

The winningest coach in West Virginia history, Nehlen served as Mountaineers’ coach from 1980-2000, posting a 149-93-4 record in Morgantown and a career record of 202-138-8. He led WVU to 13 bowls and 17 winning seasons. Selected to the National Football Foundation and College Football Hall of Fame in 2005, he was recently awarded with the American Football Coaches Association’s Alonzo Stagg Award for lifetime achievement for the sport of college football.

Beamer’s Tech squads went 9-5 in head-to-head competition with Nehlen and the Mountaineers with the Hokies winning six of the last seven meetings when the two coaches were at their respective schools.

Read more: What went wrong at the Blacksburg Bash?